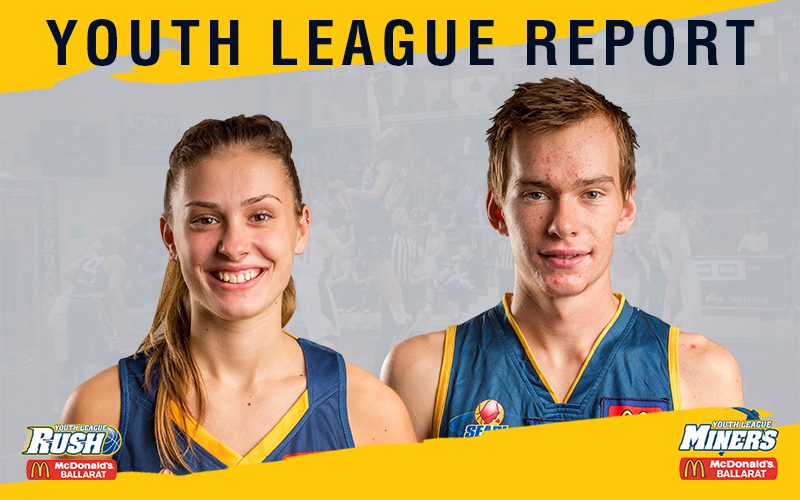 Round 3 of Big V Youth League saw both the McDonald’s Ballarat Youth League Rush and Miners return to their home court at the MARS® MINERDOME.

The Rush went into the game hunting their first win of the season and faced off against Hawthorn Magic. The game started at a quick pace and it was going from end to end with neither team being able to get an advantage in the first quarter with the team tied at 18 points each at the first break

After the break the McDonald’s Ballarat Youth League Rush took control of the game outscoring Hawthorn 18-10 taking a lead of eight into the main break.

The Rush continued on their way in the third quarter with Taylah Wynne asserting herself into the game with three massive three pointers helping the Rush to 12-7 quarter and leading Hawthorn by 13 at the final break.

The last quarter was scrappy from the Rush and Hawthorn got within two points but the Rush held it together and despite losing the last quarter they came out on top for the first time this season by six points.

Head Coach Marcus Jenkins was thrilled to get his first win the season “It’s nice to get reward for effort, the girls have worked hard at training and that has paid off today, we still have a long season ahead of us so this is just the start.”

Straight after the Rush game the McDonalds Ballarat Youth League Miners took to the court against Whittlesea and the game was played in a very similar fashion to the women’s game before them. Both teams started shakily as they tried to get the upper hand but neither team could really break away with the score locked at 12 all at quarter time.

The second quarter saw the teams shooting percentage rise and the score started to follow, Whittlesea surged mid-way through the quarter to have the Miners trailing by 10 points at the half time break 28-38.

The Miners came out of the change rooms fired up and weren’t going to let Whittlesea walk all over them on their home court. The Miners began to work together as team and started to peg back the difference winning the quarter 20-17 but still trailing by seven at the final break.

Again the Miners came out strong fighting to get a win on their home court. The boys battled hard and tied the game at 70 all with 1.05 left remaining in the game. Whittlesea was then able to break the deadlock with seven seconds remaining with a two point jump shot with a foul to go to line, giving them the lead and eventual win by three points.

Head Coach Travis Hewish said “We started slow and our second quarter wasn’t good enough, we were able to get the game back level but couldn’t finish it off. We have a short turn around for a Thursday game against Bendigo where we will look to be better.”