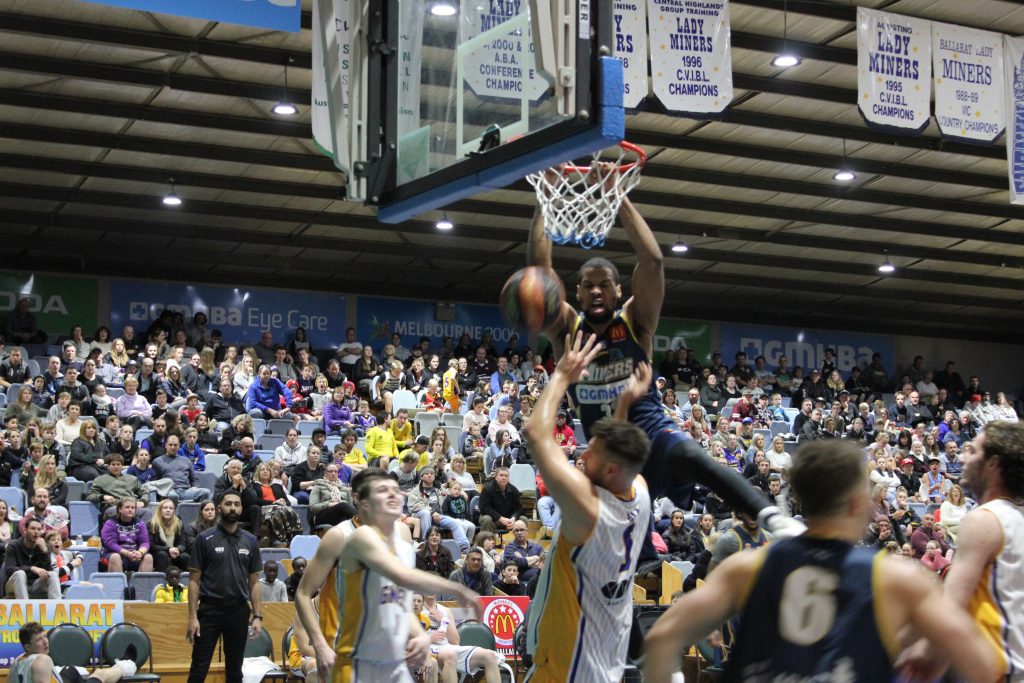 A 23-point win over the Geelong Supercats, redemption for the round one defeat in Geelong.

Pete Hooley starred again with 36 points, at 61% and 8 assists. Craig Moller was outstanding on 19 points and 11 boards. Sam Short was excellent, equaling his season high score on 13 points. New addition Leon Henry with 12 points and 12 boards was influential in securing the win and Marvin King-Davis was solid on 11 points, 6 rebounds.

Geelong’s DeMarcus Gatlin was instrumental on 19 points, 6 boards and 4 assists. Nathan Herbert with 18 points was also hard to stop.

The Miners went into the game, 2 men down. Davon Usher sidelined with a shoulder injury sustained in the last game against Mount Gambier and Chris Smith with a strained calf, injured at training during the week.

Both teams came off tough road-trips, with the Miners travelling to Mount Gambier and Geelong in Tasmania.

Cam McCallum got some early court time after Marvin King-Davis rolled his ankle in the opening minutes. Cam was strong off the ball and worked very hard defensively. With the help of some strapping tape Marvin reentered the game pretty quickly, and was back on the court in the opening term.

Moller showed the home court why he is an Australian representative, being hassled under the ring and still managing to take the rebound and put the shot up with one arm, taking the lead, 15 – 14. Hooley reminded the home crowd about his crazy long threes, by hitting two in a row to take the lead, 25 – 22 just in time for the first break.

In the second, Ballarat’s Ross Weightman stepped onto the court, and made sure his minutes were effective, playing his role well. A late time out in the term, Hayes praised his side’s hard work off the ball and their ability to effect 7 stops in a row. Maintaining good defense was the focus going back out on to the court.

Hooley continued to attack the basket, and by the main break he and the Miners had extended the lead to 22 points, 62 – 40.

The message at half time from the Miners coaching staff was, despite having a 22-point lead, the game is not over. Hayes noted that Geelong is a good side, who will not just give up, emphasising how important it is for Ballarat to come out ready to compete.

Marvin committed his fourth personal foul early in the third and the game’s physicality intensified. On three quarter time buzzer, tensions escalated when Geelong’s Jamie Medved took a shot from the corner right in front of the Ballarat bench, Hooley ended up on the floor and a scuffle escalated including almost everyone from both teams. The incident resulted in DeMarcus Gatlin and Kristian Rocci being ejected from the Minerdome, and the injured Davon Usher asked to leave the bench.

Entering the final term, 85 – 68 the Miners held a 17-point lead. At the 5:59 minute mark Geelong’s Maalo Hicks committed his fifth and final foul and the Supercats were forced to finish the game, three men down.

Hayes urged his side to continue the movement offensively and not to be complacent. He asked Ballarat to maintain that intensity to get the redeeming win at home. Short turned it up in the last minutes, and helped the Miners end the game, 23 points up, 107 – 84.

Hayes noted post game that he knew he and the tem were in for a fight against Geelong, who are a quality side. He was happy with how well the Miners played against an experienced and high ranked side. It was important to get this win, to stay around the top of the ladder, said Eric.

Game MVP was awarded to Ross Weightman, for his intensity off the bench. Weightman thanked the packed home crowd for the volume and support. He spoke about how important the energy off the bench with his teammates is and that it helped him play his role so well tonight.

Hayes did note however, next round they have 2 hard games, but right now he will be happy with the great basketball that his side demonstrated Friday night.