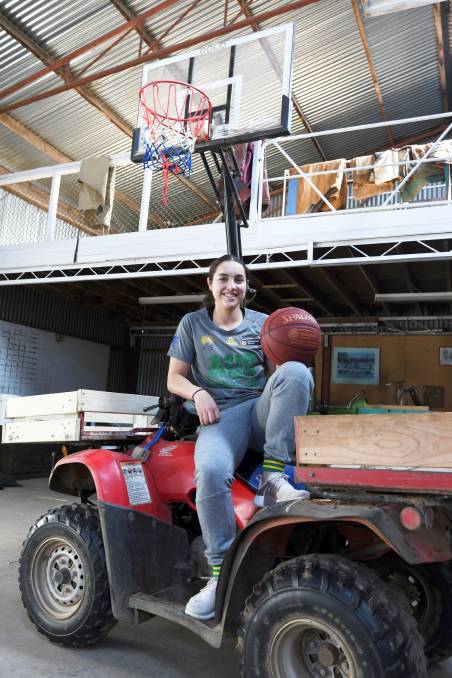 Georgia Amoore was shaking when she sat down in front of three coaches on Sunday morning to hear whether she had made the final cut of the Australian Sapphires’ Under-17 World Cup team.

Story by Siobhan Calafiore at The Courier. Photo by Lachlan Bence.

The meeting occurred near the end of a second intensive training camp at the Centre of Excellence in Canberra.

The Ballarat Clarendon College student said she felt a very different kind of emotion once the coaches had revealed her selection.

“I was still shaking, but it wasn’t from being nervous, it was from excitement,” Amoore said.

“My face just dropped, I was just relieved.

“But I know that the hard work starts now because it is a quick turnaround.”

Amoore, who plays for Ballarat Rush in the South East Australian Basketball League, will arrive in Belarus with the Sapphires squad on July 11.

The team will then have a week of preparation before the FIBA tournament kicks off on July 22.

Amoore said the extra time in Minsk, Belarus, would help the squad climatise and become more familiar with the facilities and each other.

“We are a really athletic team, so a lot of pace,” Amoore said.

“We’ve been told to make sure we are all on top of the plays and conditioning, shooting, skill sets, so when we do get over there it is not back to square one and we are ready to go.”

But with seven of the 12 basketball players selected from Victoria and the girls having time to bond during the two camps, Amoore said the group already had established a strong connection.

Despite finding the initial camp daunting, Amoore said her fellow athletes had made the experience easier.

“It’s always fun with the group of the girls we have,” the 17-year-old said.

“It takes a lot of the pressure off when everyone is in the same boat.”

The world cup will be Amoore’s second overseas campaign after helping Australia claim the inaugural FIBA Under-16 Women’s Asian Championship – the event which earned the Sapphires direct qualification.

While Amoore regards the Asian championship experience in India as one of her greatest highlights, she had not let herself believe she would make it so far so soon.

“I didn’t really think it was going to happen and it has all gone so quick,” Amoore said.

“I just never really expected it to be honest.”

But, she said, the community and coaches at Basketball Ballarat always had believed in her and have shared in her excitement.

Amoore credited a lot of her development to the time she has spent with Rush, benefitting from the knowledge and wisdom of the more experienced players.