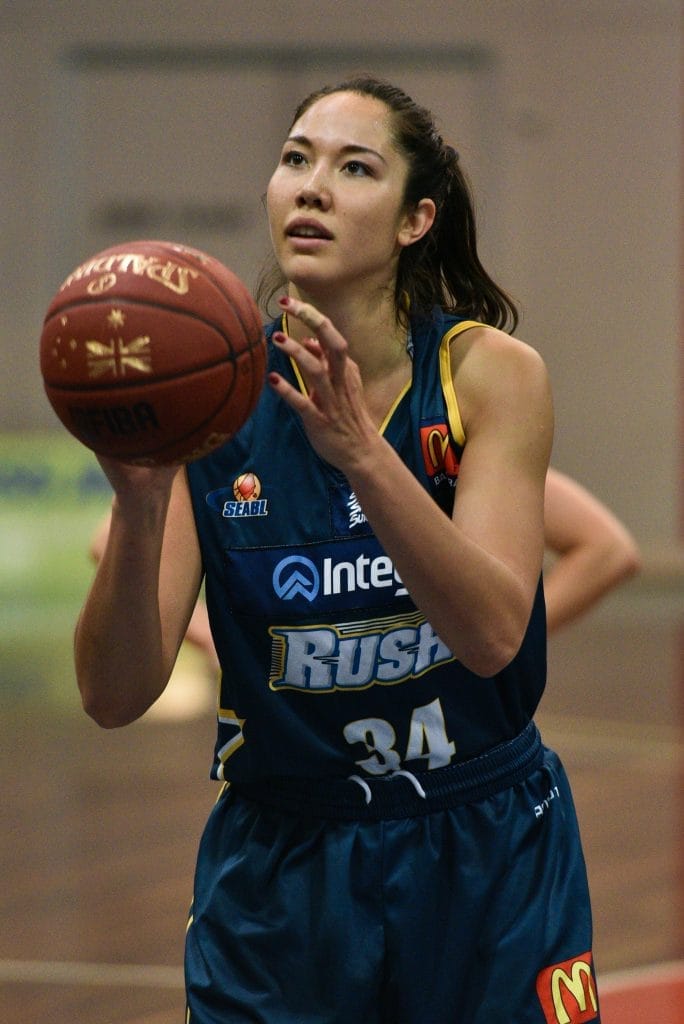 The Ballarat Rush are thrilled to announce that 2016 MVP Joy Burke will return for the 2017 South East Australian Basketball League season. Burke signed a contract tying her to the Rush for at least 2017 season with the option of the 2018 season before she departed for the United States on Thursday morning.

On signing Burke said “I really believe in the direction of the program with it having the right people in place. Although this season was disappointing not making finals we as a team believe that we have some unfinished business”.

Burke had an outstanding first year in the SEABL averaging a double double with 15.1 points and 12.4 rebounds per game. Burke was ranked 3rd in the league for total rebounds with 272 and with 39 blocks she was ranked 2nd.

Burke received SEABL Team of the Week honours on five occasions in rounds 3, 10, 13, 14 and 17 and in Round 3 she was named the player of the week after she scored 34 points and had 18 rebounds at the MARS MINERDOME against Sandringham.

Burke achieved 13 double doubles with 11 coming from the final 13 games of the seasons.

Burke has done a tremendous job out in the wider Ballarat community attending a number of different activities and event that may or may not relate to her basketball.

Basketball Ballarat CEO Peter Eddy said that “Joy ranks amongst the best athletes, male or female, that we have had come into our program. Her values, commitment to excellence, work ethic and enthusiastic nature make her an invaluable role model for our younger players. Away from the game Joy presents as a very professional, caring individual who mixes and represents us well whether visiting a children’s reading session at the library or at a corporate function”.

Basketball Ballarat Elite Teams Director Emma DeRuiter stated “She is a sensational brand ambassador and we are fortunate to have her in our program.”

Kym Cassells who chairs the Rush Elite Teams Committee said “Joy has been a fantastic addition to the Ballarat Rush not only for her work on the court but also within the Ballarat Community”. Cassells continued, “Joy was a priority signing for our 2017 team and we look forward to her returning to Ballarat in early 2017 to continue her journey with the Rush.”

Rush Head Coach David Flint further praised Burke saying “I am ecstatic that Joy has re-signed with the Ballarat Rush, her level of professionalism and wanting the best for team is second to none.” Flint continued, “Now that Joy has signed on we can move our attention to re-signing other players and preparing for our 2017 campaign”.

Burke has returned to the United States to see her parents for a couple days before flying out to Taiwan where she is assisting her younger brother in setting up his professional basketball career. “I am looking forward to seeing the family and making sure my brother is settled into Taiwan, I am also hoping to catch up and work with sponsors and businesses in Taiwan that I have worked with in the past.”

Burke is planning on returning to Ballarat early in 2017 “I am looking to do more within the club and the community next year and it would be great to get that all started well before the season starts”. Burke went on “hopefully the majority of the team will also be signed up by then and we can put in the work early and get the rewards when the season starts.”

Burke finished with “I just want to thank the community and the fans for their amazing support. It has been awesome to come into the games and see such large crowds with familiar and new faces each and every home game.” “Ballarat are building a championship winning culture with the staff and players that are in place and I can’t wait to get back and work with them.”