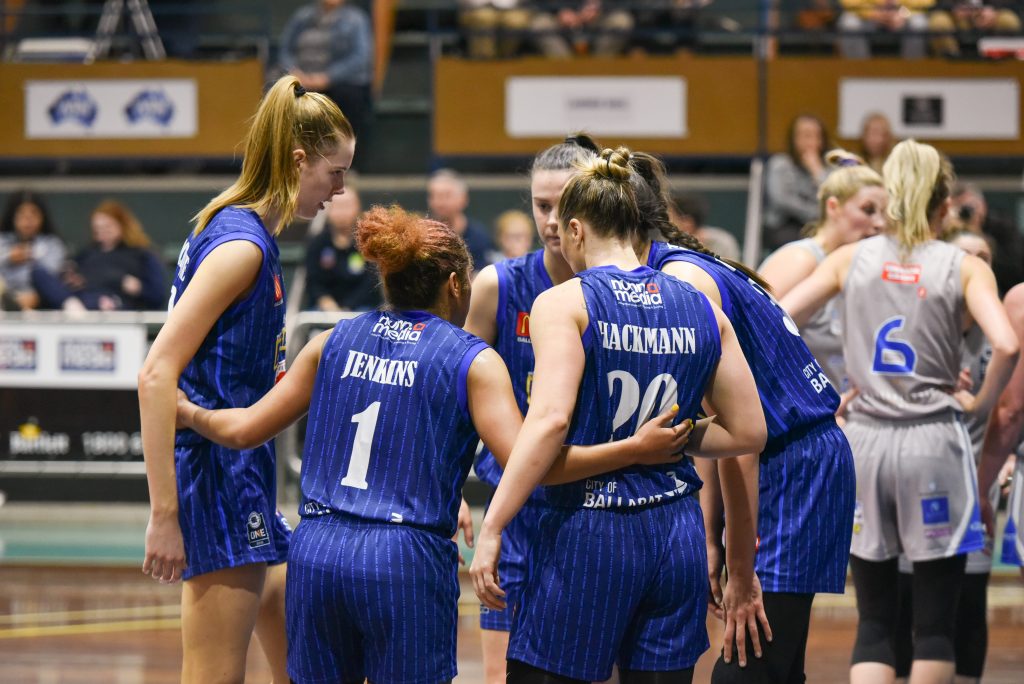 The Hotondo Homes Ballarat Miners and Selkirk Ballarat Rush have come off their second last back-to-back weekend with differing results as they head towards a five-game home stretch to finish the regular season.

The Rush were competitive against second placed Bendigo but eventually fell 71-81 and were in control against Albury Wodonga but a poor last quarter saw them go down 81-100.

The Miners were able to secure two strong wins in tough games that could have gone either way. They pulled out all the stops to knock off Bendigo 88-84 and held off a competitive Albury Wodonga side to take a 103-93 win.

Marqueze Coleman enjoyed a great weekend with two all-round good games. He put up 22 points, three rebounds, five assists, three steals and a block against Bendigo and backed it up with 19 points and eight rebounds against the Bandits.

Saturday night in Bendigo produced two entertaining and close encounters, the Rush opening the night with a competitive outing against the Braves who entered the game 13-1.

While the result didn’t fall their way, the Rush were happy with 21 points from their bench players compared to just 11 from Bendigo.

In a first quarter that was back and forth, the bench of Georgia Amoore, Claire Constable and Claire Blower were strong adding nine points to help the Rush take a one-point lead into quarter time.

The starters put in their two cents worth also, as the Rush were able to go 11/18 from the field, including two threes to start the game off strong on the offensive end and apply some scoreboard pressure.

It wasn’t until late in the second quarter that separation started to occur on the scoreboard. Following a hot start to the quarter from Constable with the Rush’s first five points, the girls couldn’t find a bucket in the final four minutes, Bendigo going on a 9 to 0 run to give themselves an 11-point buffer at half time. 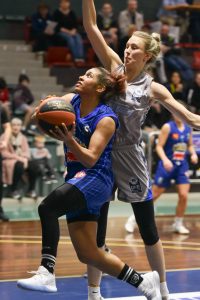 Coming out of the main break Laura Taylor continued her hot shooting on the night, knocking in one of her three long range bombs and attacking the rim to knock in two free-throws to keep the Rush in the game. This helped start an 11 to three run to get the game back to just eight points late in the third term.

The Braves were able to steady however and showed why they are one of the top teams in the league. A 10 to two run in the late stages of the third and early minutes of the fourth quarter put the game in a tough spot for the Rush.

Burke did her best to inspire the comeback with seven last quarter points, but it was too little too late as the now playoffs bound Braves held off the girls to take win number 14 on the season.

Olivia Hackmann spoke about the importance of preventing the lapses that occurred in the second quarter, which proved to be where the game was lost for the Rush.

“They pushed us out of what we wanted to do … and then everything kind of fell apart for us in that instance (the second quarter), but we’ve got to learn to bounce back when things aren’t going our way,” she said.

After almost knocking off one of the ladder leaders, the Rush returned home to the Mars Minerdome to take on Albury Wodonga but a last quarter lapse ended up being their downfall.

Very similar to the night before, the girls started off hot on the offensive end, going 10/20 from the field including four three-pointers to take a three-point lead into the break.

Following a tough game in terms of scoring the previous night, Hackmann was on a mission, pouring in 10 first quarter points including a tough and one jump shot to get the bench and crowd involved at home.

While the scoring dropped, the game stayed tight throughout the middle two quarters, neither team able to put together a big run. The Rush held the advantage though, taking a two-point lead into half-time.

The Bandits shooting started to come to life in the third, going up as many as seven during the quarter. Chanise Jenkins steadied the ship though, pushing the pace in transition to get an easy jumpshot, attacking the bucket for two and knocking in a big three all within two minutes to keep the deficit at just four.

The girls couldn’t continue this form into the fourth quarter though which was their downfall, as the Bandits went on an 18 to six scoring run to help them to 32 points for the quarter and put the game well out of reach.

Despite 11 points in the term from Burke the Rush weren’t able to get consistent stops defensively to put some scoreboard pressure on Albury and they ran away with a 19-point victory.

Young gun Laura Taylor says that finishing out quarters was one of the most important aspects of the game the Rush had to fix up.

The Rush now turn their attention to the 2-13 Diamond Valley Eagles at home next Saturday night, the game kicking off at 6:00 pm.

The Miners faced two tough challenges in Bendigo and Albury Wodonga but answered the call with two close wins to improve their record to 13-2.

Facing a Braves side that has been a much stronger team at home this season, the Miners came out with the hot touch to start the game.

All five starters got in on the action on the scoreboard with Kuany Kuany leading the way with eight points in the first term as the Miners took a 28 to 25 lead into the quarter time break.

Marqueze Coleman made his presence known off the bench also, attacking his defender on multiple possessions to draw fouls and add six points of his own.

The offensive clinic didn’t stop in the second quarter, with both teams shooting 8/13 from inside the arc as well as adding a three-pointer each.

Coleman continued to push the pace, driving hard to the rim for two tough finishes to get the lead out to seven a minute into the second quarter.

Ray Turner was proving a handful for the Miners though and his teammates jumped on his back, pushing the pace in transition and getting to the free-throw line, helping them to a one-point lead at the main break.

The second half was where the Miners found a small break on the scoreboard, going on a 12 to four run to take a handy seven-point lead.

It was all thanks to their defence, being able to get stops and score a couple of easy buckets in transition to apply some scoreboard pressure.

Bendigo wouldn’t go away however, fighting back to take a two-point lead into three quarter time. Sam Short took over with two big three’s and a layup to grab the lead back, but it was basket for basket down the stretch in the final term. 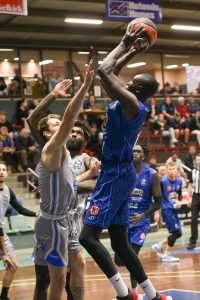 Neither team could buy consistent buckets in the final two minutes, as both teams turned the ball over. Jerry Evans Jr. came up big with a block late, but the Miners could not seal it on the offensive end.

Up two with 16 seconds left, the boys held strong with a tough defensive possession as Bendigo tried to win the game on the buzzer. Evans Jr. was fouled following the rebound and knocked in two free-throws to ice the four-point win.

Josh Fox says it was an important road win and a positive to be able to beat all the fellow country teams this season.

“They’re big, strong … so it was a good game, it was fun, it’s good to beat Bendigo on their home court and sweep all these country teams, to cement our dominance over them was great,” he said.

After a strong showing on the road, the Miners returned home to face the offensive fire-power that is Albury Wodonga.

After the 63-point drubbing from the last time the teams met, the Bandits came out firing early with a quick seven to two start to the game.

The first quarter was a series of runs for both teams, with each side going up by six or seven but letting the opposition back in with a run of their own.

Deba George was the star of the term with eight points, coming out aggressive on the offensive end after being held to two points in round five.

The second term was a shoot-out from two of the best offensive teams in the league, with Albury putting up 34 points to the Miners 31.

Coleman and Kuany continued their great weekend and got the crowd on its feet with their stellar play, pouring in nine and 12 points respectively for the term to keep the deficit at four going into half-time.

Kuany was leading the way with his intensity, getting offensive rebounds and stops and attacking the defence, forcing his way to the cup for tough layups.

His example was followed by the rest of the team in the third quarter as the defensive intensity lifted out of the break and made life easier for the Miners.

Three steals and multiple possessions of tough defence forced the Bandits into tough shots, getting the boys out in transition and putting Albury under pressure on the other end.

This was evident with a big Evans Jr. block that got Coleman out on the break for a tough layup and the foul, putting the team up seven and getting the bench and crowd hyped.

The offensive end started to a click because of this, the Miners putting up 9/20 from the field including two three-pointers while keeping the Bandits to just three field goals for the term.

The game was still up for grabs however, the Miners holding a slim four-point lead heading into the fourth.

It wasn’t until a quick 10 to nothing run late in the term that the boys felt comfortable, Short knocking in two free-throws after a hard attack on the rim to give them a 12-point lead and another hard-fought win.

Fox spoke about the importance of an even scoring contribution which the team put up against the Bandits as the playoffs approach.

“It’s hard to focus on one guy in our team because if you focus on him then other guys are going to step up … so we’re very lucky to have a lot of talented guys on the team,” he said.

The Miners now turn their attention to Diamond Valley on Saturday night at home, with tip off scheduled for 8:00 pm.