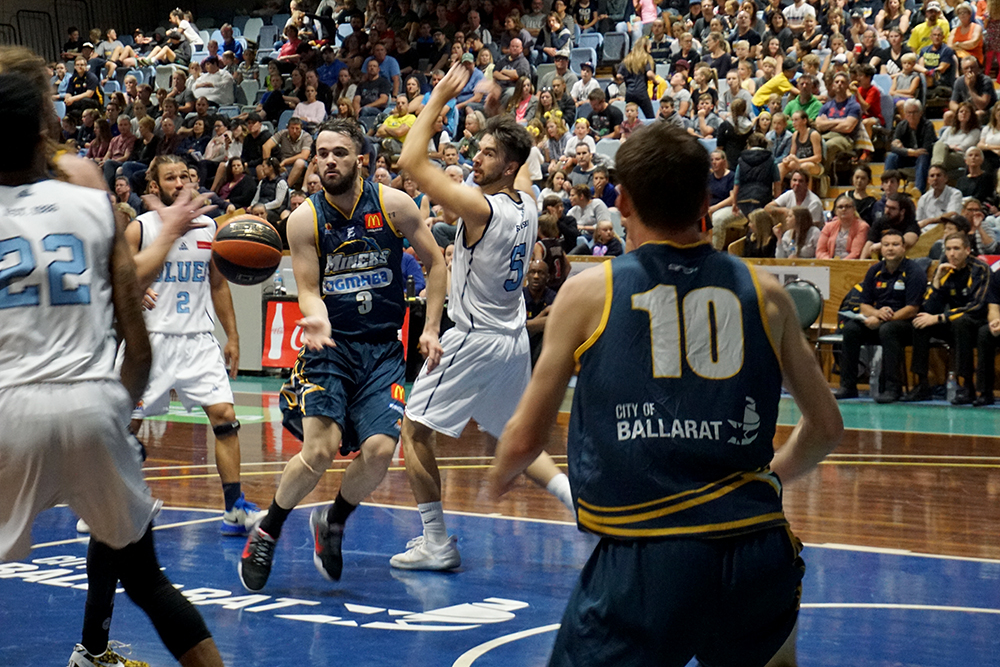 The Ballarat Miners stormed home with a 10 point victory, 102 – 92 over the Albury Wodonga Bandits in front of a packed house.

Peter Hooley was phenomenal with 44 points, 4 rebounds and 4 assists. Marvin King-Davis had 19 points with 9 rebounds and Sam Short finished with 10 points, 5 rebounds.

Marvin King-Davis opened the scoring for the Miners, in what proved to be a close encounter in the first, with scores tied at 27 at the first break. Hooley started strong with 10 points, shooting at 53% and Craig Moller had a handy 7 points to start the game.

Commencing the 2nd term, saw Ash Constable and Davon Usher get into the game and create some good scoring opportunities. But unfortunately, with less than a minute to go in the term, Craig Moller committed his second technical foul and was ejected from the stadium. At the main break, the Miners trailed, 45 – 51. Albury Wodonga were able to capitalise from the Miners turnovers, making 11 of their points from turnovers.

The Miners levelled the scores early in the third, King-Davis bringing the score to 53 all. Hooley also showed some excellent footwork on his way to the basket contributing to the 26 points Ballarat was able to add to their score in the third. The Bandits were kept to 6 points for the term, and that was testament to Ballarat’s pressure on the defensive end.

Heading into the final quarter, the Miners led, 71 – 57, and Pete Hooley already had 29 points.

The final term, saw the Miners extend their lead to 17 points and continue to excite the home crowd. Ballarat ended an exciting game of basketball, as 10 point victors over the Albury Wodonga Bandits.

The second half was incredible, said Head Coach Eric Hayes, and spoke about Peter Hooley’s incredible effort. Hayes noted he was surprised to see the numbers, because he played such a great team game, and his points just ticked over. It was certainly a great effort on his part, but it was also just in what we do, said Hayes.

Eric thought he and the team made good decisions, and played some really smart team basketball Saturday night.

I think we’ve been pretty confident with our game, but certainly that win, that adds a bit more confidence to the team, they can see what they are doing well on the court and then they know it works, said Hayes.

Peter Hooley, Saturday night’s MVP, spoke at the after match function, and despite his monster 44 points, noted that he was happy to have committed only one turnover for the game, as this has been an issue for him of late.

The Ballarat Miners hit the road Sunday 7 May, to play Dandenong at 2:00pm and will return to the MARS Minerdome on 21 May at 2:00pm to take on the Kilsyth Cobras.