The Hotondo Homes Ballarat Miners and Selkirk Ballarat Rush were unable to stop the momentum of Waverley on Saturday night as both teams went down to the Eagles.

The Rush were competitive all night and leading at three-quarter time but were unable to get over the hump, going down 76 to 83.

Chanise Jenkins continued her stellar season, putting up a near quadruple-double with 33 points, eight rebounds, 10 assists and nine steals.

The Miners were in the game right to the end but with key players missing from the rotation they couldn’t find a way, losing 77 to 90.

Deng Acuoth was superb on both ends of the floor with 21 points, 12 rebounds, a steal and three blocks. Sam Short was consistent also with 15 points, five rebounds, five assists and three steals.

The Rush set the standard early in their contest with Waverley, taking a four point-lead into the quarter-time break.

Their defence was stifling in the opening few minutes, heavily contesting every shot from the Falcons and battling hard for the defensive rebound.

Shots weren’t falling on the other end to begin the game, but the dam wall eventually broke and Joy Burke and Lucy Cochrane were able to get multiple layups in transition and give the Rush the lead.

The Falcons bought the game back to even before Georgia Amoore caught fire to end the first term, hitting back-to-back three pointers to get the crowd excited and start an 11 to nothing run for the Rush, giving them a nine-point lead.

This offensive spurt seemed to lift both teams as they continued to shoot the ball well into the second term. The Rush went 8/20 from the field including three triples, while Waverley shot 11/21 including four three-pointers.

In a back and forth term some quality shooting from Amoore, Jenkins and Olivia Hackmann from deep kept the scoreboard ticking over for the Rush.

Waverley had edged their way back in front late, but a hard drive from Jenkins finished off with a nice floater got the deficit to just two and the girls went into the main break with confidence ahead of the second half.

The Falcons came out hot though, going on a nine to nothing run to take a 10-point lead midway through the third-term. Joy Burke got the ball rolling though with a tough offensive rebound and put-back to kick-start a 13 to nothing run for the Rush.

Some stops on the defensive end kept the run going, as Jenkins and Hackmann hit multiple threes on the ensuing possessions to get the crowd pumped and force Waverley into a timeout.

A floater from Amoore to end the third-term gave them the lead as the Rush capped off a 15 to three run to end the quarter.

The fourth quarter looked like it was going down the same road as the first three, with both teams exchanging buckets and the lead throughout the term.

Jenkins hit two big threes as the Rush looked like they could run away with it, but Waverley were able to lock down defensively and score nine straight points late in the term to take a nine-point lead.

Jenkins continued to attack the rim and hit three free-throws to get the game to six with a minute to play. The girls were only able to lower the deficit to five though with 23 second left, as the Falcons held on for their eighth win on the season.

The Miners were strong with men down, but a solid fourth quarter from Waverley got them the 13-point win. 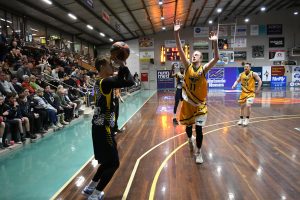 As was the case with the Rush’s game, the opening term was back and forth, neither team able to get a strong lead at any point. Acuoth led the way with seven points in the quarter, but Waverley had climbed out to a five-point lead.

The second quarter was a tale of two halves, the Miners bench contributing a lot of the offense for the second half of the term. The Falcons owned the first half, a seven to nothing run giving them an 11-point lead.

Zac Dunmore, Blake Allison and Tristan Fisher put on seven points to answer as the Miners fought to get the deficit back to five at the main break.

This seemed to get the Miners into gear, with Sam Short hitting a three, grabbing a steal on the other end and Kuany Kuany hitting a transition three to get the deficit to just two early in the third.

The crowd was hyped now with the boys seeming to find their flow on both ends of the floor. Short kept his hot shooting going with another two makes from long range, but the Falcons were holding on, keeping their lead at five at three-quarter time.

Neither team was giving an inch in the final term, with both sides exchanging buckets and stops, but neither able to build a game-winning run or lead.

Allison continued to make the most of his extended minutes, hitting a transition three off a dish from Jordan Lingard to get the team and crowd hyped.

They continued to exchange buckets for the remainder of the term, until Short grabbed a steal and hit Acuoth in transition for a big dunk to get the lead to four, the Miners sniffing a comeback win.

This was as close as they would get though, Waverley pulling out all the stops in the final three minutes to go on a nine to nothing run and take their ninth win of the season.

The Miners and Rush now look to their final regular season game of the year against the Melbourne Tigers next Saturday night at the Mars Minerdome, the girls tipping off at 6:00 pm, the boys at 8:00 pm.