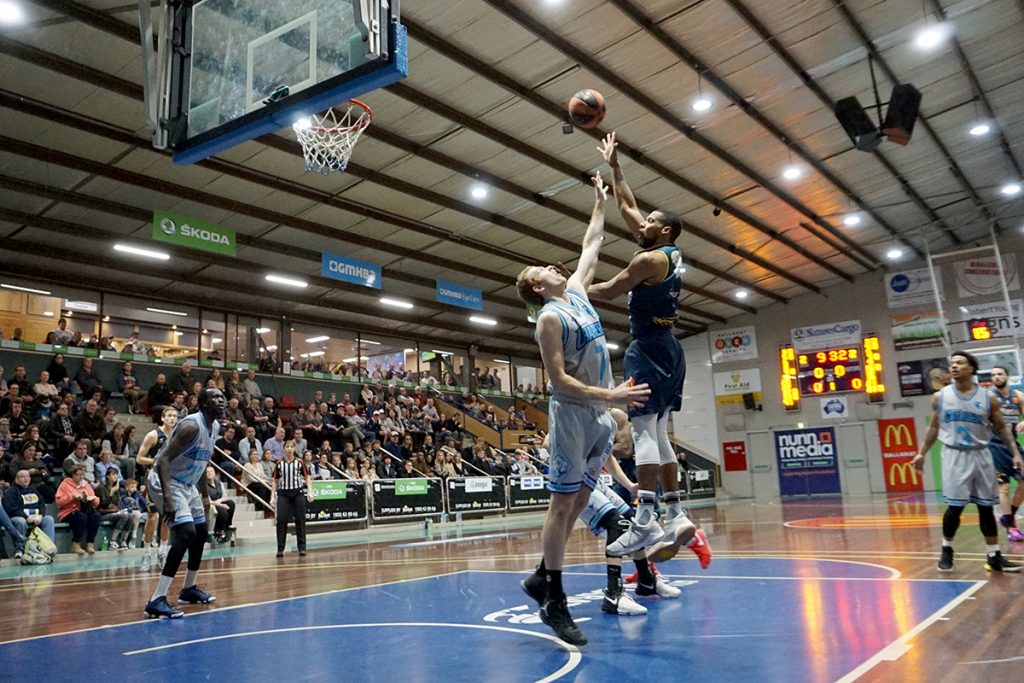 The Ballarat Miners are through to a South Conference Grand Final with a tough win over the Hobart Chargers, 81 – 77.

Their first appearance at a Conference Final since 2001, when Head Coach Eric Hayes suited up.

Marvin King-Davis was unstoppable on 19 points and 14 rebounds, with all five Ballarat starters making double figures.

Hobart’s Tom Garlepp was hard to stop, with 22 points and 16 rebounds. Chris Whitehead also had 16 points for the Chargers.

At the quarter break, the Miners trailed Hobart, 14 – 26, only shooting the ball at 31%. The Miners rallied in the second quarter, cutting a 12 point Hobart lead to 5 at the half time break, 37 – 42. Davon Usher and Marvin King-Davis combined nicely, bringing the whole team with them.

Ballarat’s ball movement and their defensive efforts had increased in the second, and they looked poised to continue this into the second half.

Craig Moller started the 3rd with the first score and with that the Miners intensity increased, King-Davis made 9 points and took 5 rebounds for the term, and at the end of the third quarter, Ballarat lead 60 – 53.

A tense fourth period saw Hobart and Ballarat scores stay close, keeping the home crowd on the edge of their seats.

With less than 30 seconds on the clock Sam Short rose to the occasion and knocked down a nice mid range jump shot, which more or less sent the Miners to the final. Even Short said, post game, that wasn’t his shot, but man he was happy to hit that.

Despite less than a minute in the game, a number of timeouts and plenty of free throws saw Moller secure the victory for an excited home crowd, securing 3 out of four of his free throw attempts.

When the game was in the dying stages, the team held composure. Head Coach Eric Hayes, noted that Hobart are “a quality side. They were never going to quit and its just great that our guys weathered the storm, they came back and could’ve easily panicked and let them overrun us, but we were able to get a crucial stop or a big rebound. So we just made some big plays when we needed them, it was awesome.”

MVP Marvin King-Davis, was crucial in the win, and Hayes specifically noted the rebound on the missed free throw late in the game, “was incredible”

“He is one of those fellas, when it comes to a fight, then his intensity and his commitment to what he is doing out there really lifts and I think you saw that tonight. He seems like a pretty cruisy guy but when he gets out there and its time to compete and its on then he really steps it up and it was great.” Hayes.

Focused on their own team, Hayes said “we just want to play our game and make great decisions. I just think our defence wasn’t what we wanted it to be early and they were able to get into a nice flow and once our defence kind of got a little bit more organised then we were able to dictate the tempo a little bit better.”

A great contribution from the starters from Ballarat Saturday night, and “that’s one of the things we talked about at the start, its not just about individual stuff right now”, Hayes.

“We want to win this as a team, we are at our best when everybody is contributing and everybody involved.”

Not content with the performance Saturday night, Eric said there is always some room for improvement. “But, ultimately, what you want to do is win and that’s what we did, they found a way to win”.

Having the week off, is excellent timing for the Miners. “We will make a light week, we’ve got some guys with a few niggling injuries, so its an opportunity for some guys to get some rest and then we will reload the following week.” Said Eric.

Being without Craig Moller for the Conference Final, Hayes said “Hopefully we can take care of business and have him for the one that goes after that, that would be nice.”