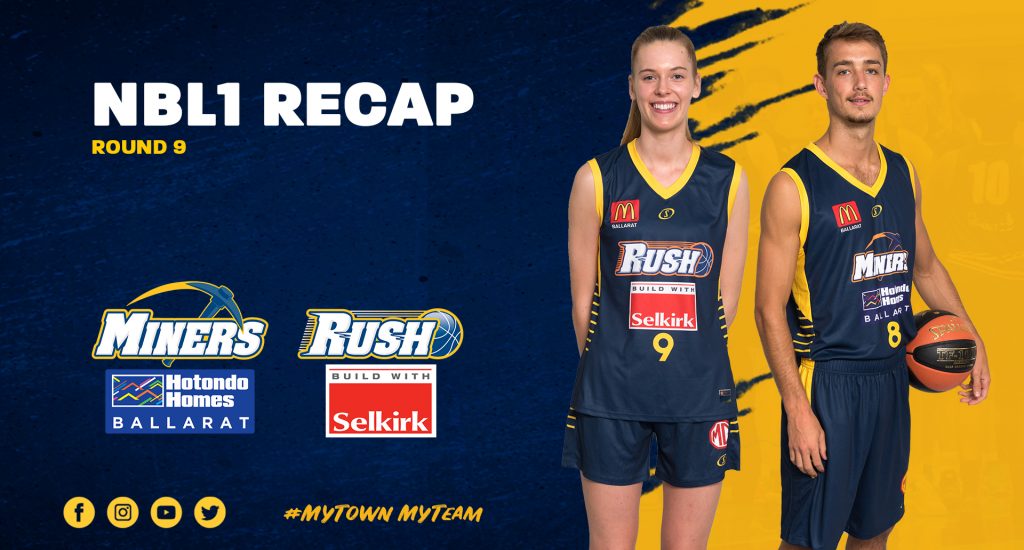 The Hotondo Homes Miners and Selkirk Ballarat Rush had mixed results in last weekend’s double header, each going 1-1 in their fixtures.

The Rush had control of their encounter with Ringwood late on Saturday night, but a Jacqueline Trotto jumpshot stole the 76-75 win for the Hawks. They were able to right their wrongs though with a tough 89-87 overtime win against Frankston on Sunday afternoon.

Joy Burke said while Saturday’s loss was tough, it was great to re-group and get the win on Sunday.

“The loss on Saturday night heart-wrenching and that’s why on Sunday we just looked at each other in the fourth quarter … and said ‘no, this is not happening again’ and pulled out a great win,” she said.

Olivia Hackmann enjoyed a great weekend with back-to-back 30-point games, while Chanise Jenkins was an able assistant with 18 points and eight assists and 16 points and four rebounds in the two games.

The Miners led from start to finish against Ringwood and were able to dominate in the second half to take a 101-79 win. An energised Frankston team made the most of the boys back-to-back schedule however to take an 87-80 victory.

The bench was the story for the Miners against Ringwood, Marqueze Coleman adding 21 points, Tristan Fisher hitting five three’s for 17 points and Jordan Lingard putting in 12 points.

Josh Fox starred against Frankston with 18 points and 11 rebounds and Coleman was strong off the bench with 16 points and seven rebounds.

Fox said Saturday’s win was solid but the slow start against Frankston wasn’t ideal for the team.

“On Saturday I thought we played a pretty decent game we were hitting on all cylinders … then on Sunday … we came out really slow, really disappointed in our performance,” he said.

The Rush opened their weekend with a strong first quarter against Ringwood, taking a 12-point lead into the quarter time break. Their three-point shooting was making life hard for the Hawks, going 4/7 from long distance in the first.

Ringwood were able to close the gap though and outscored the Rush by 15 in the second and third quarters to take a three-point lead going into the fourth.

It wasn’t for a lack of effort from the Rush on the defensive end, but offensive rebounds became an issue in the second, allowing the Hawks to secure eight of them. The momentum seemed to be killed slightly, making it harder to get easy buckets on the offensive end. 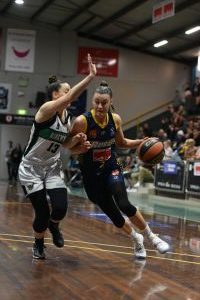 Hackmann and Laura Taylor stemmed the tide though will a couple of big three’s off some patient offense to keep Ringwood at bay.

A 10-0 run in the third allowed the Hawks to take a 10-point lead but as has been the story in the last four games, the Rush’s shooting bought them right back. Four late makes from deep broke the Rush’s dry spell and the deficit was cut to three.

The fourth quarter was a battle, with the lead changing four times and the scores tied on four occasions throughout the term. Hackmann was huge with 11-points for the quarter, but Ringwood answered with a late bucket to take a one-point lead with four seconds left.

Georgia Amoore had a good look at a floater in the lane but hit the front of the rim as the Rush’s four game win streak came to an end.

The Miners followed the Rush’s example, coming out hot with an eight to nothing run to start the game off two three’s from Sam Short and Kuany Kuany.

Ringwood proved a tough opponent in the first half after these opening moments however, never allowing the lead to grow too big and keeping the Miners honest.

The lead was cut to two late in the first, but Marqueze Coleman proved his importance off the bench, making back-to-back jumpshots and scoring eight points in just four minutes in the first.

The game ebbed and flowed but it wasn’t until the end of the second when Fox had two big blocks leading to a technical foul on Ringwood that they seemed to gain the ascendency.

This carried into the third term and the Miners never looked back, getting the lead to 15 off five-straight points from the games MVP Kuany Kuany.

Fisher and Lingard banged in their first triples for the game and the crowd was as loud as it had been all night with the Miners in control. Another three from Lingard and two in a row from Fisher at the start of the fourth had the crowd on its feet and the lead was suddenly 24, game over.

Although the starters didn’t dominate as they had, the boys 50 points off the bench showed the depth of the squad and the different options they can look to when the game is in the balance.

Josh Fox echoed this sentiment, stating the bench were the game winners on the night. 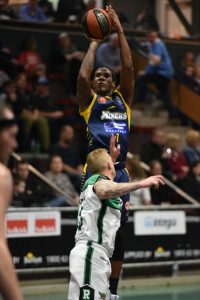 “Our bench really carried us I thought … Jordan (Lingard) and Fish (Tristan Fisher) came in and basically blew the game open for us,” he said.

Frankston was up next for the Rush, who came into the game off a dominate 18-point win over Diamond Valley the night before.

In a fast-paced start the game the Blues made the most of their transition opportunities with a 10-0 start.

This was as far as it would get however, the Rush slowing the game down and going on a 13-0 run of their own to take the lead early in the second quarter behind a Georgia Amoore jumpshot.

From there it was a back and forth encounter, both teams taking the lead at different points but neither able to put the game away.

The Rush were able to edge ahead in the middle two quarters though on the back of some hot shooting, going 12/21 from the field and hitting five three’s in the second and third term’s to take a five-point lead going into the fourth.

Strong defence on and off the ball and great ball movement allowed Hackmann and Amoore to hit back-to-back three’s late in the final term to take a five-point lead. But Frankston wouldn’t go away.

Taylor Lee was fouled on a three-point attempt and hit all three free-throws to take the game to overtime following Lucy Cochrane’s missed jumpshot to win the game.

Overtime was taken over by the Rush’s twin towers Joy Burke and Cochrane, dominating on the defensive end and kicking off the scoring with a nice feed inside from Lucy for an easy Burke layup.

After some strong offensive rebounding without a bucket Cochrane answered with a slick catch and shoot at the elbow to give the Rush a two-point lead. But still the Blues wouldn’t give up.

They evened the game with two free-throws before Jenkins fought her way to the bucket for a foul, sinking both free-throws with just three seconds left.

Stephanie Reid heaved up a last-minute shot but it was no good, the Rush making up for the previous night’s disappointment with a strong win on the road, taking their record to 5-7.

Burke said it was the belief in each other that helped the girls get the win and keep themselves in the finals hunt.

The Miners followed and entered the game un-beaten on the road but ran into an energized Frankston line-up looking to bounce back from their loss the previous night.

Kuany Kuany started where he left off with a three to get things started on the scoreboard, but from there it was a struggle from the three-point line.

The Miners shot the ball well from inside the arc, going 14/27 for the first-half, but couldn’t buy a bucket from down town, shooting 1/14 in quarters one and two.

The Blues made the most of the boys uncharacteristic shooting, going on a 9-0 run to take an 11-point lead early in the second, which would carry into half-time.

The Miners kicked into gear in the third, going on a 10-0 run to cut the lead to three mid-way through the term. Josh Fox was leading the way with his energy, and Kuany Kuany continued that form.

A big three and then a hard drive to the rim to draw the foul carried the boys momentum as Frankston started looking for answers.

Down eight early in the fourth, the Miners continued to press with six points within a minute to cut it to four. Coleman got to his spot near the free-throw line on back-to-back possessions for easy jump shots, before stealing and dishing to Sam Short for an easy transition bucket to cut it to one.

This was as close as the boys would get though, as Frankston pair Damon Bozeman and Lachlan Barker closed the game out late with four and six points respectively in the final six minutes of play to give the boys their second loss of the season.

Coach Brendan Joyce said the slow start let them down but he was proud of the fightback throughout the game.

“They jumped us at the start and credit to them they really came out of the blocks … but one of the things I was pleased about … was I thought we really fought it out,” he said.

This takes the Miners record to 10-2 and a still a game clear on top of the ladder, with Nunawading and Geelong nipping at their heels.

The Rush and Miners now get to enjoy a weekend off before turning their attention to Geelong on Saturday the 15 of June at Geelong Arena, games kicking off at 5:00 pm and 7:00 pm respectively.