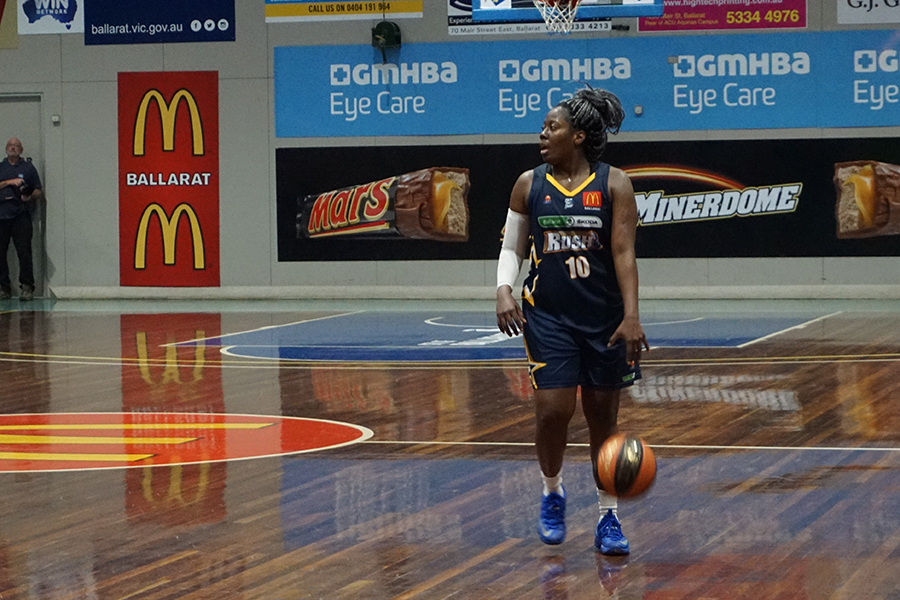 The Ballarat Skoda Rush finishes the weekend with two important wins. Saturday night saw the Rush triumphant over Bendigo Lady Braves, in Bendigo, which has historically been a hard task.

Sunday, the Rush took over the Minerdome, to beat Albury-Wodonga comfortably, 75 – 56. Ashleigh Spencer starred with 20 points, 8 rebounds and 7 assists. Jaterra Bonds had 18 points with 11 boards and 8 assists.

Captain Kristy Rinaldi with 11 points and 5 assists. Claire Constable had an impact in her time on the court, finishing the game with 8 points.

Albury Wodonga were reliant on Adijat Adams, with her 22 points and 5 assists and Toccara Ross’s 14 points.

Assistant Coach Rob Baker, noted that coming into this weekend “we were a bit worried without Joy – obviously, we were hoping a few would step up and they have, all of our girls.” It’s a real big positive to get a win without Joy, highlighted Baker.

Ballarat had all 10 players step up last night, said Rob “and today we’ve had all 12 step up. It was a big positive to see the bench players from previous few games step up.”

Offensively Ballarat shared the load and scoring contributions were evenly spread. Baker said, “we tried to get the ball through hands early, and the first half especially, we had 17 assists in the first half. That’s something that we haven’t had all year, so its good that we are getting the ball through hands and that was the reward we had, we had a nice lead coming into the second half.”

Baker spoke about rebounding and noted that “JT especially stepped up both nights, she got something like 16 boards last night, and 11 today. She’s really stepped up, but the rest stepped up as well.”

“Big emphasis from Dave coming into yesterday – the rebounding” said Rob and he noted the team were worried without Joy’s 12 rebounds a game, but everyone else stepped up which was awesome, said Baker.

Having a very young side finish out the game was a positive for Ballarat, “that’s the reward for them”, noted Baker, and they are hopeful to reward them a couple more times.

Ballarat kept Albury Wodonga under 60 points, and Baker paid testament to the work they put into their defence, “we are not over-helping, not overcommitting, so we’ve really fixed up a few of our errors on the defence that we had at the start of the season,” said Baker.

The Rush are really happy with where they are placed at this stage of the season, 6 wins, 11 losses, and Baker noted, “the first 9 games were a killer, but we learnt from those and we’ve shown we’ve learnt from those. If only we made those adjustments a little bit earlier, things could be a bit different, but if Hobart can start loosing a couple games for us, we are a bit of a chance, that’s a positive that we are still a chance for finals.”