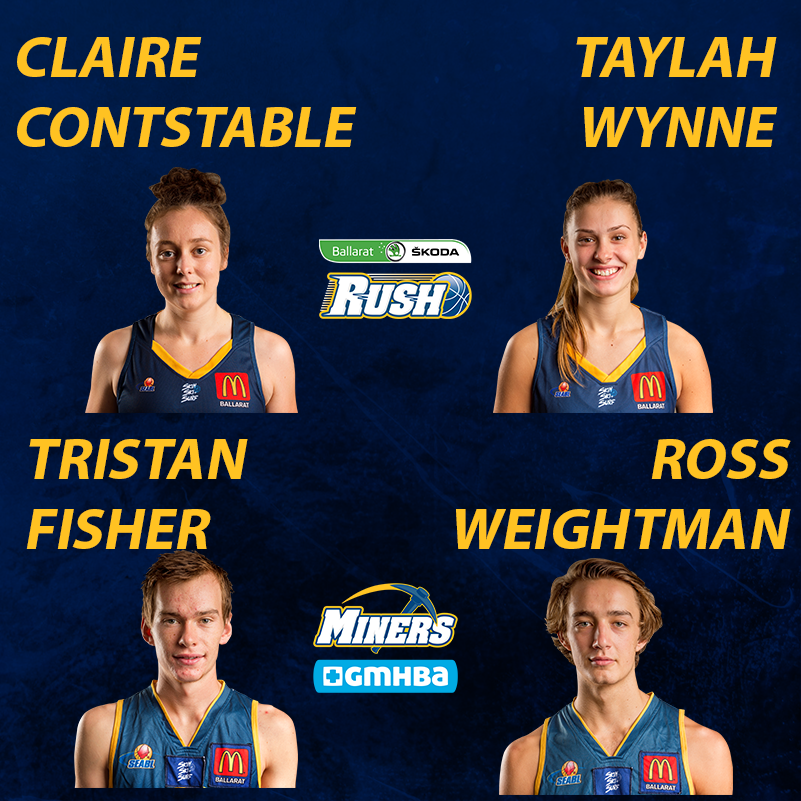 The GMHBA Ballarat Miners and Skoda Ballarat Rush have finalised their SEABL rosters for the 2018 season with Tristan Fisher and Ross Weightman returning to the Miners and Claire Constable and Taylah Wynne signing with the Rush.

Fisher is a local Ballarat player and first started his basketball journey with the Celtic Tigers before moving into the Junior Elite Program and progressing into the Senior Program. In 2017 Fisher played in 19 Youth games averaging 19 points, five rebounds and four assists per game and was in contention for the Youth League One Men’s MVP and All Star Five honours but was narrowly edged out. Fisher also played in 13 games for the SEABL Miners, he played 22 minutes against Dandenong and scored a career high of seven points in the Round 15 win.

GMHBA Miners Head Coach Nathan Cooper-Brown said “This is a pivotal year for Tristan. He has been a highly-touted junior, but now it’s time for him to show us he can compete at senior level. We have given him specific things we need him to focus on at practice, so if he puts in the work, he’ll get his opportunities to show us what he’s truly capable of.”

Cooper-Brown added “Promisingly Tristan has shown us that he is keen for more of a role in 2018 by the amount of work he has already done in Spartans over the break. He has invested in his body, so if he can now invest in his game as well, we should be that much more successful for having him at his best.”

Meanwhile Weightman was a late comer to elite basketball having never been involved in the Junior Elite program, Weightman joined the Senior Elite Program from Celtic Tigers at age 17 in 2015.  A talented and hardworking player Weightman has worked his way through the Youth League Miners and played in seven Youth League games as well as 16 SEABL games in 2017.

Cooper-Brown speaks highly of Weightman “This is an exciting year for Ross, we are expecting him to build on what he was able to do last season. He has consistently been one of the hardest workers and best teammates, and when you are putting together a championship formula, guys like that are invaluable.”

Cooper-Brown finished with “We hope Ross can increase his minutes per game by providing hard-nosed defence, movement off the ball, finishing, and rebounding for his size.”

Wynne then played in all 22 games for the Skoda Ballarat Rush scoring a career high of 12 points from four three pointers against Launceston in a must win game. The Rush did win to keep their finals hopes alive but still narrowly missed the finals. Constable missed just one game for the Skoda Rush and her best game came in round four against with nine points in a loss to Melbourne Tigers.

Ballarat Skoda Rush Head Coach Eric Hayes said “It’s great to have Claire and Taylah again in the senior Rush program which continues the long history of the Rush supporting local talent.  Both players came through the junior program and now they are part of the senior program due to their hard work and commitment.”

Hayes continued, “I had the pleasure of coaching both girls as juniors so it is great to have them involved and help them to continue to develop, they will have a great chance to learn and develop by playing and training against some very experienced Rush players and some high quality imports.”

Hayes finished with “this is an exciting time ahead for these two girls continuing their senior basketball journey.”

Both the GHMBA Ballarat Miners and Ballarat Skoda Rush have resumed full preseason training with Josh Fox, Nic Pozoglou, Joy Burke, Courtney Walker and Courtney Williams all due to arrive within two weeks time. Sam Short and Peter Hooley will join the Miners when their commitments with Melbourne United wrap up which is expected to be late March.