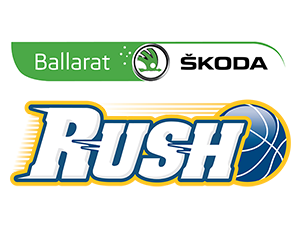 The first game for 2017 saw the Ballarat Skoda Rush fall to the Geelong Supercats by 26 points, 90 – 64 at the Geelong Arena on Friday night.

New addition, Jaterra Bonds top scored on 23 points, and 5 assists. Joy Burke had a solid double double, with 19 points and 10 rebounds. Ashleigh Spencer was handy on both ends, with 8 points, 7 boards, 3 assists and 2 steals.

The new look Rush, was able to utlise their entire squad, with every player notching up valuable experience on the court. Unfortunately Geelong just proved too powerful for the Ballarat side, and was able to capitalize on the Rushs’ errors, making 23 points from Ballarat’s turnovers.

Sara Blicavs top scored for the Supercats with 28 points and Chantel Horvat had 16 points, 13 rebounds.

Head Coach, Dave Flint noted that there are games his side cannot win, when they allow the opponent to do what Geelong did Friday night. With 23 turnovers as a team for the game, they cannot win games like that, he also noted Geelong’s offensive boards of 26 and a score of 90, makes it a mission for the Rush to come out on top.

Jaterra Bonds’ 23 points were well received by Coach Flint, especially being her first game. He however noted that the 7 turnovers, needs to be cut down and Jaterra had mentioned this to Flint post game.

Flint was happy to have all his players get on the court, he appreciated being able to get Taylah Wynne, Claire Constable, Claire Blower and Jade McCowan to play with the core group, but Dave Flint said he needs his core group to play better, “simple as that, and I need them to want to play better.”

Frustratingly, with 5 minutes to play in the first half Ballarat were down a small 4 points, and then allowed Geelong to go on a 17 – 3 run. Flint saw these scores coming from quick shots, bad plays from the Ballarat side and simple fast breaks, and said “that should never happen”.

Dave Flint now has some time to get things set up with his side, having another bye next week and a break over Easter, he plans to get his team back to what they worked on in the pre-season and get some more cohesion.