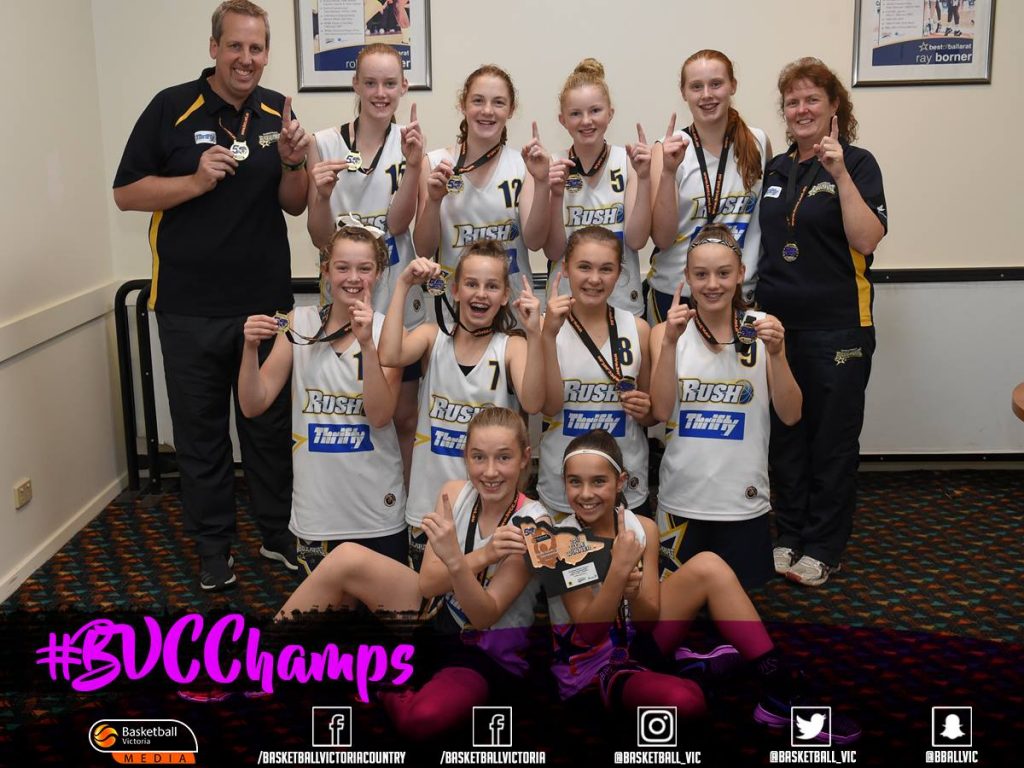 The Thrifty Under 14 Ballarat Rush are the 2017 Basketball Victoria Country Champions, and Basketball Ballarat is buzzing with excitement over the win.
The Rush went undefeated through the team’s nine games during the tournament held here in Ballarat, edging out Bendigo 29-24 in the championship game.

Head Coach Lidina Constable was thrilled with her team’s achievement.

“I’m really pleased to win the tournament, and especially with such a great performance – winning nine from nine is a first for me,” said Constable.

Constable was particularly happy to beat Bendigo in the final game.

“We hadn’t beaten Bendigo so far this season, although we’d had some close games,” said Constable.

“The girls did everything I wanted. My goal is for them to believe in themselves, and play above the level they thought they could play at.”

The team’s composure and unity perhaps come from Constable’s approach to coaching, which is a personal one rather than technical.

“I try to take my passion for basketball and put it into their game. I want to get kids to that level where they go from being someone who plays basketball to having their hearts beat out of their chests for it,” said Constable.

Showing the depth of the team, six of the Rush’s 10 players stepped up to score in double figures across the weekend.

“This team really is 10 deep; all of the girls showed they are able to step up,” said Constable.

Constable stressed the importance of good foundations in achieving success.

“The success of our team this year, and really all of our teams across the board, comes from learning those basic skills in under 12s, and the way our program operates,” said Constable.

“I’ve only ever had one other team that is so evenly skilled and with the right attitude.”

There is little time to celebrate, however, with the team conscious of their next goal.

“Now the focus goes back to VJBL (the Victorian Junior Basketball League) where we need to finish top four in our pool to go to the VJBL Classic Invitation Only tournament,” said Constable.

“By winning the Country Championship we have got a spot in the National Under 14 Club Championships in October.”