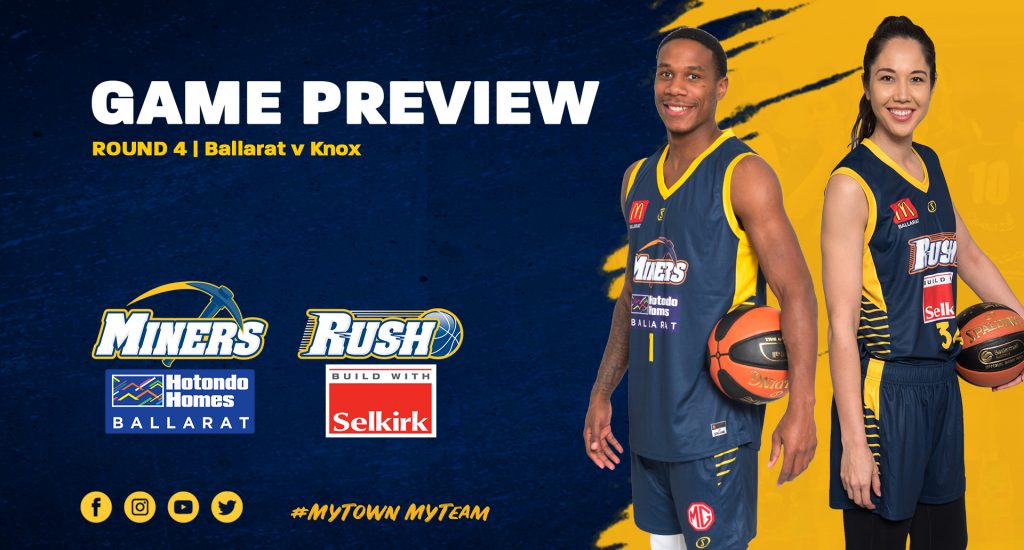 The Hotondo Homes Ballarat Miners and Selkirk Ballarat Rush return to action this Saturday night in the second of their five-game road trip, travelling down the highway once again to face Knox.

Following a weekend off for Easter, players and coaches are refreshed and energised to face two quality Knox teams on their home floor.

The Miners welcome import Marqueze Coleman to the side for his first game of the season following a hamstring injury.

Arriving after playing professionally in Germany and Portugal where he averaged 19.5 points, 4.5 rebounds and 2.6 assists a game last season, the 6-foot-3 guard will no doubt inject some extra energy and an experienced head into the team.

The Miners are coming off a great round three win in which they dominated Dandenong for long periods of the game, so coach Brendan Joyce will be looking for a full four-quarter effort against the Raiders as they look to go 4-0.

Rebounds, assists, steals and blocks all point towards Knox’s favour, but the Miners shoot a healthy 47% from the field and 42% from three compared to 41% and 29% for the Raiders.

The addition of Coleman will help keep these percentages high and will provide another scoring option for the team.

Deng Acouth will be vital on the defensive end also. His shot blocking and disruption of shots will be important to keep Knox’s field goal percentage down and allow Sam Short and Jerry Evans Jr. to get easy buckets down the other end in transition.

The boys come up against a 1-3 Knox team that has had a rollercoaster start to their season. They provide a sense of danger however, as they have looked better than their record suggests, losing one or two games they should have won.

Guard/forward tandem Adam Thoseby and James Hunter will be two players the Miners will look to minimise. Thoseby has started the season strongly averaging 17 points and 4 assists, with Hunter ably assisting with 14 points and 7 rebounds a game.

The Rush enter round four 0-3, but following some competitive games, are due to break through and get their first win of the season.

Playing second placed Dandenong in round three, the girls were in the game at half-time, only down 10 after leading mid-way through the second quarter.

Coach Eric Hayes will be hoping for a similar effort across four quarters, as they come up against a Knox team that leads the league in scoring with 92.8 points a game.

The Rush, behind Joy Burke and Lucy Cochrane, have been active on the boards averaging 38 per game, and will need to replicate this on Saturday night.

With Knox only averaging 33 rebounds a game, Burke and Cochrane will be important to firstly defend and change shots, but then also to rebound, get into transition and allow Georgia Amoore and Olivia Hackmann and others to run the floor and score easy points.

The battle of the benches could be the game changer, with both teams possessing a bench cohort that can impact on the scoreboard.

Georgia Amoore, Claire Constable and Claire Blower have been important in every game for the Rush, leading the bench to scoring 22.3 points a game.

Knox’s bench is just as effective, averaging 23.5 points a game through their first four outings.

Olivia Hackmann will be hoping to continue her strong start to the season (averaging 13 points a game) as she joins Georgia Amoore in battling the strong Knox backcourt of Rebecca Ott and Abigail Wehrung.