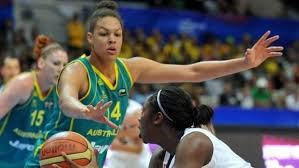 Two of the biggest names in Australian women’s basketball Liz Cambage and Kelsey Griffin, will headline a Community Camp and Exhibition match in Ballarat next month between the Melbourne Boomers and Bendigo Spirit.

The match will be played on Friday September 22nd with ticket sales to open next week.

LIZ Cambage has returned to Australia to play for the Melbourne Boomers as she prepares for a return to the US based Women’s National Basketball Association (WNBA) competition in 2018 and the Tokyo Olympics in 2020.

Cambage returns to the Boomers after having played overseas since 2012. Her last professional contract worth an estimated $400,000 per season was in China

The 25-year-old hasn’t played a game since last August after taking a break from the game after the 2016 Olympics.

The 203cm centre returns refreshed and ready to play with the Ballarat exhibition game being a key part of her return to the international stage.

Cambage was the key player for the Opals at the Rio Olympics.

Cambage plans to study at Deakin University while playing with the Boomers.

The new WNBL 16-week season starts in October and ends in January.

The Boomers have also signed another former club premiership star, Jenna O’Hea, who last played in the WNBL for Dandenong Rangers.

O’Hea plays for Seattle Storm in the WNBA.

Headlining the Spirit team will be Kelsey Griffin an American-Australian professional basketball star.

Kelsey played five seasons in the US for the Connecticut Sun after being taken third in the 2010 WNBA draft.

Kelsey was named in the All-Rookie team during her first year, and in 2012 she helped The Sun reach the Eastern Conference finals. In 2013, she was the only Sun player to start in all 34 of their games.

Her time in the WNBA followed on from a hugely successful college career at University of Nebraska.

Kelsey has also played international basketball in the Euro League, Israel, and, of course, Australia.

Since she landed on Australian soil, Kelsey has become a force to be reckoned with in the WNBL. She has played four seasons with the Bendigo Spirit, leading her team to two championships with Grand Final MVP performances.

She has been selected in the WNBL All Star 5 twice, and was named Defensive Player of the Year in the 2014-15 championship season.

Kelsey achieved her personal dream in 2016, becoming an Australian citizen. With this came the honour of being selected in the Opals squad then playing in the Australian Opals team that fell just one-point short Japan in the recent FIBA Asia Women’s Cup final, losing 73-74.