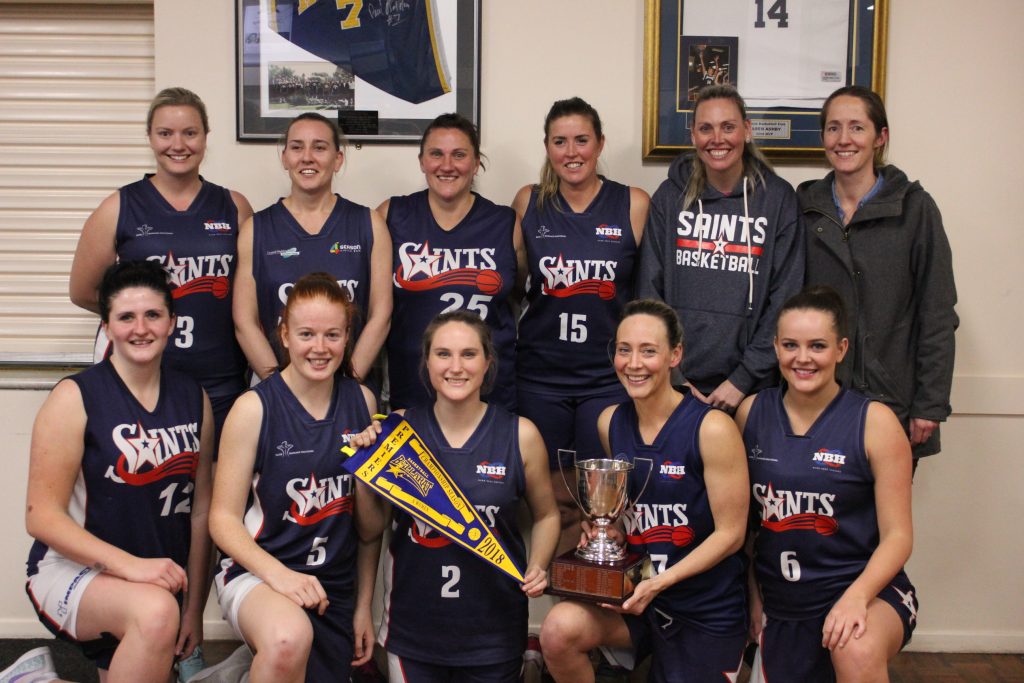 Saints Basketball Club have completed the double winning the A Grade Men’s and Women’s Grand finals Monday night at the Mars ® Minerdome. Saints were the last club to do this back in 2009 taking home both championships.

Saints Women’s side took on Exies Acmy Basketball Club in the decider with Exies accounting for Saints two weeks ago in the first final by 8 points, but it was all Saints in the grand final running away with the win 41 points to 29.

They didn’t have it all their way however with Exies jumping out to an 11-0 lead on the back of Ella Burton and Sister Kasey Burton’s sharp shooting. But the momentum quickly swung back in favour of Saints, scoring the next 18 points straight and Ebony Bromley dropping 7 of those.

From there Saints kept Exies at arm’s length with a 10 point buffer for most of the game. Sophie Molan was creative for the Saints getting to the basket and drawing fouls on her way to a game high 15 points. Ebony Bromley also had 9 points for the Saints in a strong performance. The Burton sisters both managed 10 points each but weren’t successful in getting their team over the line.

The Dawn Jose MVP was awarded to young gun Sophie Molan who had an outstanding game.

The Men followed on from the great start to the night taking on The Bearcats who were in their first season of competition. Bearcats were promoted into A Grade on a successful tenure in the A1 competition and showed everyone why they were placed in A Grade. But it was all Saints on the night jumping out to an 11-2 head start. It seemed that Saints big men Chris Smith and Amos Brooks may be too strong for the smaller Bearcats outfit but Ryan Stevens wanted none of that taking it up to the Saints on his way to a game high 14 points.

But the Saints big men in Smith and Brooks kept getting the ball in close and kept their team in front. Phillip Benn was strong all night bringing down rebound after rebound and setting up his team for high percentage shots.

Bearcats made a late charge but fell short to the Saints 42 to 46 giving the club the double premiership in the highest local competitions respectively.

The Peter Eddy MVP was awarded to Phillip Benn who had 6 points but was strong across all areas without committing a single foul.

In the Other games for the night: