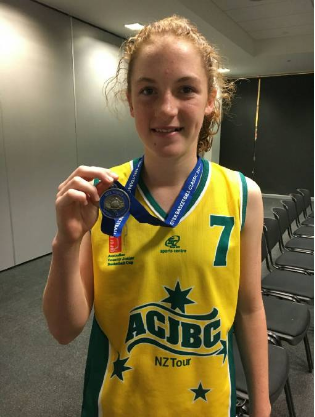 Article from The Courier’s Daniel Short.

Hutchinson is just 12 years old, and much like her teammates, tested themselves against much more experienced and often more imposing girls. But the Australian team was not to be out-muscled and made an impressive run to the grand final which brought about a silver medal – going down to Waitakerie in the grand final, 75-66.

Hutchinson was the only Ballarat representative on the tour, which included players from all over Australia in the under-15 and under-17 competitions.

The promising talent impressed selectors in Albury earlier this year when she represented Vic Country to earn a spot in the side.

Hutchinson’s mum, Jenny, said it was an amazing experience for her daughter with the trip providing not only high-quality basketball, but also an opportunity to bond with fellow top-level players and the rigours of travel that elite sport demands.

“She loved it, it was great. She enjoyed playing with girls from all over Australia,” Hutchinson said.

“Meeting new girls and playing at that high level was great. Plus playing against New Zealand girls, they were a bit bigger and stronger, and thriving to that challenge.

“When she went to Albury to play she knew that she had to play well to get selected and she was so determined to play at the highest level and she did it, so that was fantastic to see her play such good basketball so consistently.”

Hutchison said Ella wanted to take her basketball as far as possible, but had a laid-back approach to the game and at this stage she simply enjoys playing and getting the best out of herself.

“She just wants to go as far as she can and experience as much as she can.”

Hutchinson was also a part of the successful division one Country Championships team a fortnight ago.

The teams landed in New Zealand last Wednesday before a training session on Thursday. Matches were played across the long weekend with the grand final on Monday.

The Australian team enjoyed successful campaigns. The under-15 boys fared the best over the weekend, taking out the gold medal. The under-17 girls won the silver medal while the under-17 boys went down in the bronze medal play-off.