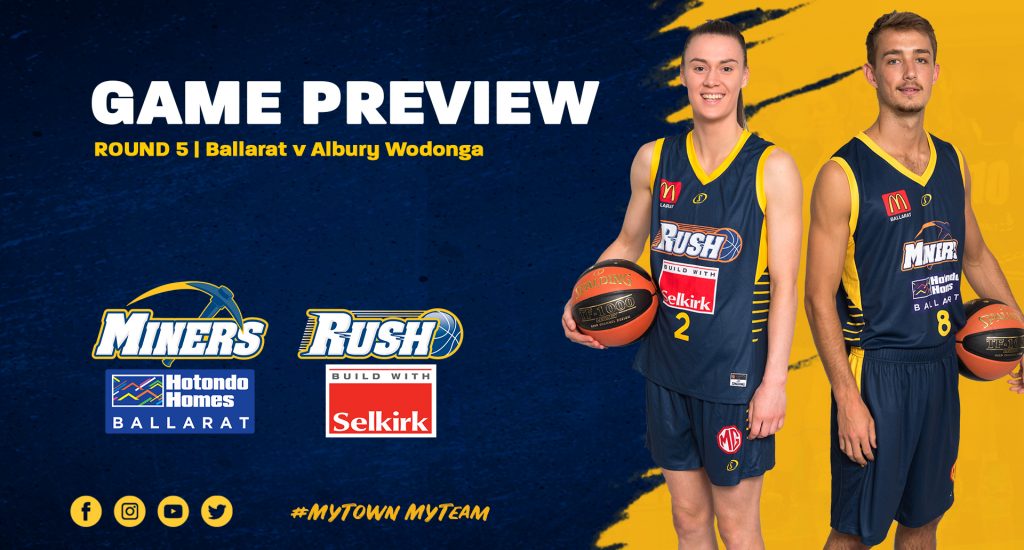 Round five of the NBL1 season is quickly approaching, with the Hotondo Homes Ballarat Miners and Selkirk Ballarat Rush preparing to travel to Albury Wodonga to face the Bandits this Saturday night.

Following their near comeback victory over Knox in round four, the Rush are keen to replicate the performance and get on the winners list this weekend.

The girls three best performers last weekend, Olivia Hackmann (24 points) Georgia Amoore (27 points) and Joy Burke (18 points and 16 rebounds) will be looking to lead the way again, but will have their hands full on the defensive end this week with some quality opponents on the other side.

Natalie Hurst and Emma Mahady have started strongly at the guard spots for Albury Wodonga, while Jessie Edwards has been strong at the centre position averaging 19.3 points and 11 rebounds a game.

Following the Rush’s strongest offensive game, scoring 90 points, it will be important for the them to lock down on the defensive end, particularly on these three to limit their scoring impact and get the ball to the hot hand of Hackmann and Amoore.

The statistical battle is the most even it has been for the Rush this season, with assists, rebounds, steals and blocks only separated by a couple each.

Both low-scoring teams compared to the rest of the league, the equation is simple. Whoever shoots the ball better looks destined to win the game.

Both averaging around the 40% mark from the field, there is no clear advantage in this area, meaning if the Rush can get a quick start and get confidence levels high then shots can continue to fall throughout the game.

On the men’s side, the Miners come into the game after a dominant display over Knox and will arrive at the Lauren Jackson Sports Centre 4-0 looking to keep pace with 6-0 Kilsyth at the top of the ladder.

Another even team performance led to the win last weekend, with first gamer Marqueze Coleman making a significant impact off the bench with 16 points, 5 rebounds and 4 assists.

Coming up against the 3-1 Bandits, the schedule doesn’t get any easier for the Miners.

Although coming off a loss, Albury Wodonga is one of the most explosive teams on the offensive end, leading the league in scoring with 99.5 points a game.

Ken-Jah Bosley will be the man to keep on top of, coming off a 40-point effort last weekend, adding to his league leading season average of 31.8 points a game.

With only seven bench points last week, compared to the Miners 24, it’s a clear advantage they will want to exploit.

Albury Wodonga have been strong on the boards, averaging a league third best 13.8 offensive rebounds a game, so strong rebounding will be key for the Miners to limit their second chance shots and keep their scoring down.

Jerry Evans Jr’s and Josh Fox’s 14 and 11 rebounds respectively last week will be important once again and Deng Acuoth will need to be active to keep league rebounding leader Torren Jones off the glass as much as possible.

Hoping for two wins for the first time this season, the Rush and Miners kick off at Albury Wodonga at 6:00pm and 8:00pm respectively this Saturday night.