The Hotondo Homes Ballarat Miners and Selkirk Ballarat Rush are gearing up for their second back-to-back game weekend of the season in round eight of NBL1 action.

They will welcome North West Tasmania (NW Tasmania) and the Launceston Tornadoes to the Mars Minerdome on Saturday night before travelling to Melbourne to face the Southern Sabres on Sunday afternoon.

In the men’s competition, the NW Tasmania Thunder have had an up and down season, sitting 5-4 and eighth on the ladder.

The Thunder have been a quick-fire offensive team with the ability to score in big bursts this season, averaging a league second best 93 points a game.

It was evident last week in their 22-point win over Albury Wodonga, where they hit 15 threes in the game, 12 of which came in the first half to give them a 29-point lead at half-time.

What lets them down is the defensive end, which the Miners will look to exploit with their array of scoring options.

The Miners will be looking to take advantage of this, hoping for a game similar to their first half last week, keeping the Basketball Australia Centre of Excellence (BA COE) to just 32 while they piled on 42 points of their own.

The second half saw the offence stall in stages as shots weren’t falling as regularly compared to previous weeks. 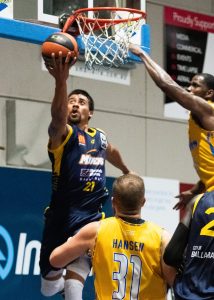 Josh fox showing his athleticism against Bendigo in round 2.
Credit: NBL1

To keep up with the Thunder, a poor shooting night won’t be accepted. Defence will be key firstly to keep their scoring down, but on the offensive end, good possessions leading to easy shots will be important.

On the defensive end, rebounding will be a key factor. The Thunder are the second-best offensive rebounding team in the league with 14 a game.

They are a bottom six shooting team however at 43%, so if the Miners can keep them off the offensive glass, prevent second chance shots and getting out in transition, it will go a long way to a big win.

The clash kicks off at the Mars Minerdome at 8:00 pm on Saturday night.
Following this game the Miners will head down the highway to face the Southern Sabres on Sunday afternoon. The Sabres sit 2-8 and last on the ladder, but they possess some weapons on the offensive end that can fire at any point.

Melbourne United star David Barlow has not played consistently during the season, but when he does he is a game changer, averaging 23 points, nine rebounds and three assists.

Ryan Beisty has been a welcomed addition for them also, playing the last two games and putting in 14 points with eight rebounds a game.

The Miners, similar to the game against the Thunder, will be hoping to make the most of the Sabres issue with allowing big scores. They are allowing a league worst 98.5 points per game while only scoring 86.2 themselves.

They are not the strongest rebounding team either, only pulling down 33 a game, so with some solid defensive possessions and quick outlets to Jerry Evans Jr. and Sam Short, the Miners should find themselves some easy baskets to apply some scoreboard pressure.

On the offensive end, rebounding will be important to put them under pressure. If the shots aren’t falling as they didn’t against BA COE, Deng Acouth and Josh Fox putting pressure on the Sabres for offensive rebounds should give them some easy second chance points.

It is seemingly a simple formula for the boys, push the pace in transition and put them under pressure and if shots aren’t falling, crash the glass and make the most of their weaker rebounding.

The clash is scheduled for 2:00 pm this Sunday at the Southern Basketball Stadium.

The Rush are coming off back-to-back wins to get their season back on track and have a great chance to make it four on the trot against the Launceston Tornadoes and the Southern Sabres.

Launceston come to the Mars Minerdome 3-6 and 12th on the ladder, one spot above the Rush.

Guard/forward pair Stephanie Gardner (17.4 points, four rebounds and five assists) and Brittany Hodges (17.7 points and 12.2 rebounds) have been stars for the Tornadoes this season.

The Rush have had a great defensive run in their two wins, allowing only 72 and 56 points, but it will be needed again to stop a Launceston team that averages 83.3 points a game, fifth best in the league.

Guard pair Georgia Amoore and Olivia Hackmann have found a good balance of offensive and defensive impact in the last two games, as has Lucy Cochrane, which will be required again on Saturday night. 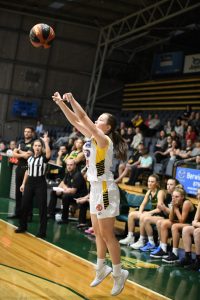 Annie Collins shooting for 3 against Dandenong in round 3
Credit: NBL1

Both teams shoot the ball very evenly and assist numbers are similar. The aspect of the game the Rush will be focusing on is their defensive rebounding.

Launceston are the best offensive rebounding team in the league with 15 a game, so Joy Burke and Cochrane will need to be tough and diligent in not allowing second chance points and getting the Rush out into transition.

This was what got the Rush back in the game and over the top of BA COE last weekend. Strong defence and no easy offensive rebounds allowed Burke to take possession and give Chanise Jenkins the chance to run and put pressure on the defence in transition, helping the team to a 13-0 and 11-0 run to take over in the second half.

If the Rush can do this and shoot the ball closer to 40%, closing the gap to Launceston’s 42%, it will go a long way to a third straight win.

The game kicks off at the Mars Minerdome at 6:00 pm on Saturday.

The team then jumps on the bus with the Miners to face the Southern Sabres in Melbourne, who are 2-8 and sit 16th on the ladder.

Rachel Jarry will be an important matchup for defensive leader Lucy Cochrane, as she comes into the game averaging 19.6 points, nine rebounds, three assists and a steal per game.

Tenaya Phillips has been strong off the bench, averaging 13.5 points and four rebounds a game. Strong bench play from Jenkins, Claire Constable and Claire Blower will be important to even out that facet of the game.

Apart from their two stars, the Sabres have struggled on the offensive end, only putting up 67 points a game and allowing 80.

The Rush have improved both of these categories in the past two to three weeks, putting up 71 points a game and allowing 79.

With this in mind, as well as the fact that the Sabres turn it over 17 times a game, the Rush will be hoping to put pressure on the ball and create a turnover or force them into a tough shot to get easy buckets on the other end.

Being able to get their confidence down early and keep their scoring low will be important to help the Rush go on a couple of big runs which has been key to the recent wins.

It was evident last weekend against BA COE with a 13-0 and 11-0 run during the second half to put the game out of reach. It will be needed again to finish off the weekend with a back-to-back win, and their fourth on the trot.

The game kicks off at 12:00 pm on Sunday at the Southern Basketball Stadium.