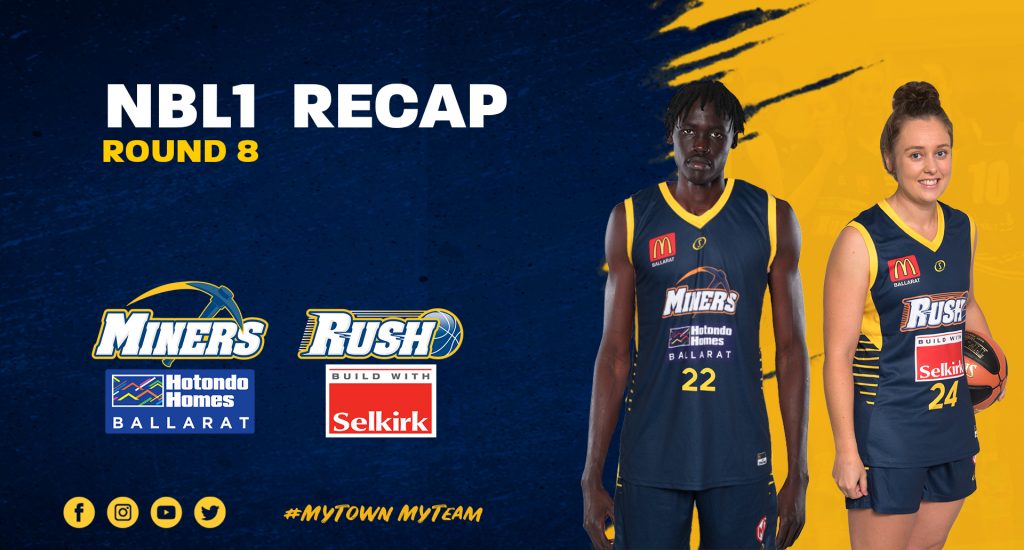 The Selkirk Ballarat Rush and Hotondo Homes Ballarat Miners have enjoyed a winning weekend with back-to-back wins each.

The Rush dominated the final three quarters against Launceston to win 130-94, their biggest win of the season, and carried that form into the Southern Sabres to win their fourth on the trot 90-72 on Sunday afternoon.

Hackmann said it was great to stay on the winners board after a slow start to the year and see the improvements in the team each game.

“It feels really good, I feel like we’re kind of rolling now, we’ve gotten better every single week, we’ve learnt a lot from our losses obviously, but it feels great to win,” she said.

With everyone sharing the scoring load, Hackmann said it was great to have a real team effort, especially on the offensive end.

“As far as offensive flow, I think we’ve been doing a great job of finding the open person … and we’ve had lots of people in double figures which is awesome,” she said.

The Miners followed suit to get back on the winners list, knocking off North West Tasmania (NW Tasmania) 94-67 and dominating the Sabres 100-66 to improve their record to 9-1.

Marqueze Coleman said the team played well in both games over the weekend, but still have a lot of things to improve on.

“I thought collectively we played really well as a unit in both games with pretty good wins but we still have a lot of things we can improve on so that’s the scary part for a lot of teams in the league,” he said.

The Rush were able to climb to 11th on the ladder and improve to 4-6, and it began with a hot shooting night in front of an excited Mars Minerdome crowd on Saturday night against Launceston.

The girls couldn’t miss, shooting 52% from the floor, hitting 15 three-pointers for the game, racking up 31 assists and only committing nine turnovers.

All five starters cracked double figures in scoring, four of whom scored 18 or more, led by Laura Taylor’s 26 points, 15 rebounds and four assists.

The bench was important also, with Annie Collins, Claire Constable and Chanise Jenkins combining for 38 bench points, led by Jenkins near triple-double with 22 points, nine rebounds and 13 assists.

The first quarter was very even, eventually leading to the Tornadoes escaping with a seven-point lead at the break. This was as far the Tasmanian’s would get away by though, as the remaining three quarters belonged to the Rush.

Jenkins led the way, pushing the pace in transition to score a big lay-up with the foul and then grabbing a steal with an easy lay-up on the other end.

This sequence helped the Rush to a 12-0 run and grab the lead. The team was energised, the bench was up and the crowd was loving it.

The team caught fire after this and never looked back. Georgia Amoore knocked in two three’s and Jenkins added another off a couple of offensive rebounds, the girls out hustling the Tornadoes to grab an 11-point lead.

A 41-20 second quarter was the difference, but the Rush kept their foot to the pedal. Claire Constable knocked in one of her four three-pointers for the game late in the third to take the lead to 29 and put it out of reach.

A 30-22 fourth quarter ended the game on a high for the Rush and handed them their biggest score and win for the season, a 36-point drubbing to keep their confidence high before hitting the road on Sunday.

The Miners kept the Ballarat crowd up and excited as they followed the Rush’s example and played a four-quarter effort to grab a 27-point win against NW Tasmania.

The hot shooting was passed on from the girls, with the boys going at 50% from the field and 40% from three to lead from start to finish.

Jerry Evans Jr. was strong with 26 points and 11 rebounds while Deng Acuoth was great on both ends with 12 points, eight rebounds, two steals and six blocks.

Following a tight eight minutes of the first quarter, captain Sam Short got the team going, attacking the rim to grab two free-throws, and then stealing the ball off the inbound to score the easiest of lay-ups. 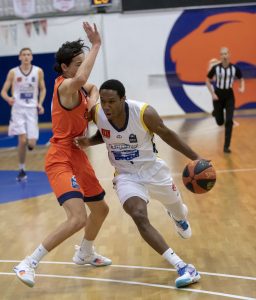 Marqueze Coleman put the explanation point on the sequence, stealing the ball on the next defensive possession and slamming home a big dunk to get the crowd excited, as the Miners closed out the first quarter with a 24-15 lead.

The boys couldn’t miss in the second term, going 11/18 from the field, including 2/5 from the three-point line. Kuany Kuany was the star of the quarter, putting in seven-points as the lead got out to as many as 20.

As good as the offense was, the defence was just as impressive, especially in the third quarter. The boys kept NW Tasmania to just 5/23 from the field and 3/9 from three for 10 points while piling on 22 of their own.

Acuoth led by example with two blocks in the first two minutes and a steal as his Tasmanian opponent looked to alley-oop the ball instead of shooting it because of Acuoth’s presence.

This helped the lead race out to 29 by three-quarter time and put the game out of reach, the Miners getting back on the winners list with a big 27-point win by the end of the game.

Riding the high of three-straight wins and the Miners joining them as winners, the Rush hit the highway on Sunday full of confidence.

It was confidence that proved influential, as the girls continued their hot shooting with 49.3% from the field to record an 18-point win.

The starting five were superb again, all cracking double figure scoring and shooting a combined 53.7% from the field.

Chanise Jenkins continued her great weekend after being promoted to the starting line-up, with 16 points, five rebounds, five assists and seven steals, while Joy Burke added 17 points and 13 rebounds.

The first two minutes of the game was like an extension of the previous night, with the girls exploding for eight quick points, young-gun Laura Taylor knocking in six of them.

The Sabres answered strongly though, getting the game back to even at 23 a piece come quarter time.

They continued early into the second quarter with the home side taking a 34-27 lead after three straight makes from long range.

Olivia Hackmann answered the call though with seven straight points to even up the contest, helping the Rush to an eventual two-point lead at half-time.

It wasn’t until midway through the third-quarter that the Rush could break through the barrier and put together a big lead. Import duo Jenkins and Hackmann took over the game with five points each, including two big threes to shut the crowd out and take an eight-point lead.

The lead only grew from there and the Rush dominated their way to a fourth-straight win. Another 10-0 run in the fourth quarter expanded the lead to 20, as the girls cracked 90-plus for the second straight game.

Looking for back-to-back wins along with the Rush, the Miners didn’t mess around, once again following the girls example, shooting 52% from the field and knocking in 11 three-pointers.

Leading from start to finish helped the boys to a big 34-point win, their fifth 20-plus point win of the season.

Acuoth was everywhere once again with 13 points, seven rebounds, two steals and seven blocks, while Marqueze Coleman added 22 points off the bench.

It was the three-point show early in the piece, as Kuany Kuany knocked in three long range bombs within four minutes and Evans Jr. joined the party with one.

Southern answered the call on the offensive end early but faded late in the term, Acuoth blocking a three-point attempt and slamming the ball home on the other end to put an exclamation point on the end of the quarter.

Two quick three-pointers bought the home side within three early in the second, but that was as close as the Sabres would get, the Miners outscoring them by 25 in the final three quarters.

A 17-0 run in the second gave the boys a 20-point lead, emphasised by Evans Jr’s two hand slam on the fast-break.

The third-quarter defensive effort was strong, similar to the previous night, keeping the Sabres to just two three-pointers and five free-throw makes for the entire quarter.

The boys pressure was strong up the floor and in the paint also, grabbing two steals and two blocks for the term, completely shutting off Southern’s scoring ability.

A strong finish in the final quarter with seven bench-points finished off the game well for the Miners, as they snagged win number nine.

The Miners and Rush now turn their attention to their second back-to-back weekend in a row, facing Ringwood at home on Saturday night before travelling to Frankston to play the Blues on Sunday afternoon.