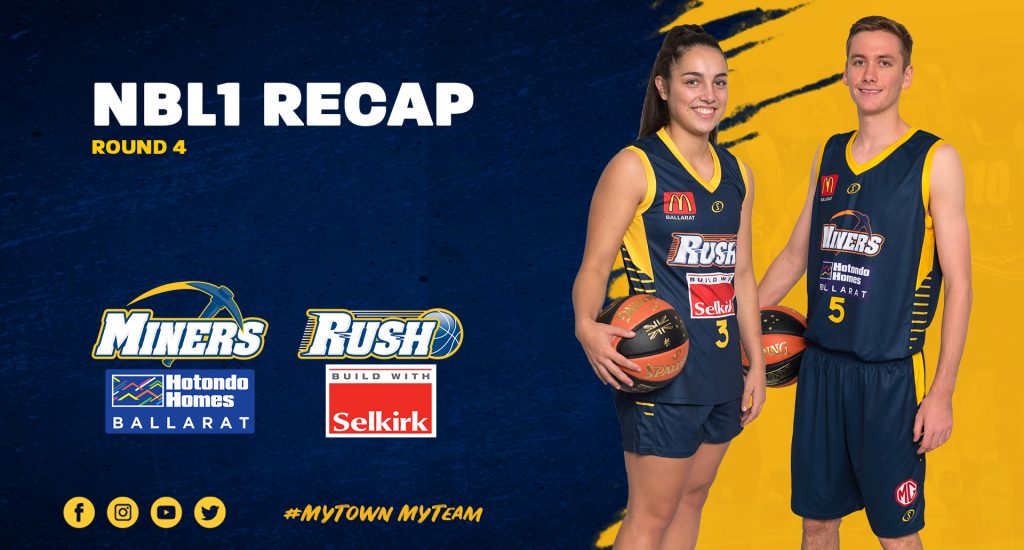 The Hotondo Homes Ballarat Miners have continued their winning start to their NBL1 season over Knox on Saturday night, while the Selkirk Ballarat Rush inched closer to their first win of the season.

The Miners were able to start quickly and never looked back, finishing with a 68-90 win, as the Rush came oh-so close to their first win, going down 90-93.

The boys started strongly with a 7-0 run within three minutes behind Jerry Evans Jr’s five points. It was their defence however that helped them to a 18-7 lead at quarter time, keeping Knox to just 3/18 from the field, a lowsy 16%.

This strong defensive effort led by Deng Acuoth’s two blocks and Evans Jr’s three steals allowed the Miners to keep the Raiders to just 33.8% field goal for the evening while shooting at a 45% clip themselves.

Marqueze Coleman looked comfortable in his Ballarat debut, finishing with 16 points, 5 rebounds and 4 assists off the bench. His eight points in the second quarter were important as the Miners pushed their lead out to 23 going into the half-time break.

After being in a similar situation two weeks ago against Dandenong and letting them back in the game, the Miners learnt their lesson and didn’t give Knox a sniff, able to halt any run the Raiders made and answer with a run of their own to keep the lead at 23 at three quarter time.

The fourth quarter was no different with another back and forth affair, with Knox winning the quarter by one to give the Miners a 22-point win.

The win was made sweeter with another even team performance which has become an impressive part of the Miners 4-0 start to the season.

Similar to the Miners, the Rush had a very even team performance, but were unable to snatch victory after a comeback in the fourth quarter. 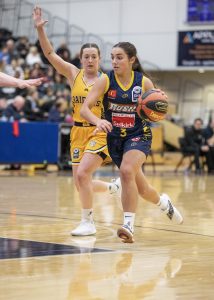 Olivia Hackmann and Georgia Amoore led the way on the offensive end with 24 and 27 points respectively, with Joy Burke added 18 points and 11 rebounds and Millie Cracknell and Claire Blower combing for 12 points off the bench.

An even first quarter with multiple lead changes saw the girls go in down 21-20 but well and truly in the game behind strong starts from Burke and Hackmann.

The second quarter was much of the same, with the Rush hitting the front but unable to build a strong lead. A quick 7-0 run by Knox gave them a bit of a break, as the girls headed into the half-time break down 53-48.

The Rush found themselves down by as many as 14 throughout the third-quarter, but behind seven points from Hackmann they were able to fight their way back and head into the fourth-quarter only down 75-68.

Well within a chance to score their first win of the season, the Rush were active early in the fourth, able to string together a 7-1 run midway through the term to bring the margin back to four.

Young guns Millie Cracknell and Georgia Amoore led the way late in the quarter, with Cracknell hitting a big three and Amoore hitting a three-point play and two further free-throws to bring the Rush within one.

With under a minute to play, Briahna Whatman hit two clutch free-throws for Knox to give them a three-point lead. Amoore had a chance to win it at the buzzer but her three-pointer was no good as the Rush fell 90-93.

The Rush and Miners will now turn their attention to the four-hour plus road trip to Albury Wodonga next Saturday to face the Bandits at the Lauren Jackson Sports Centre.