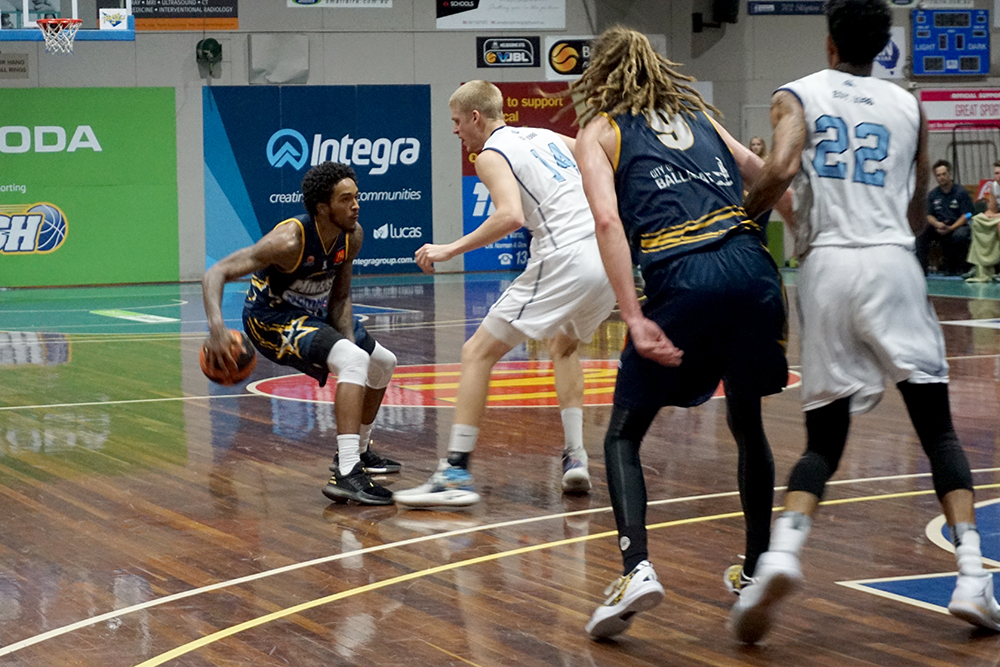 Craig Moller opened the game with an exciting dunk, which got everyone up off their seats, and maintained their small lead the majority of the term. The team used the ball well around their offenses, and with a tough opposition in the Bendigo Braves, entered the first break 26 all.

In the second term, the game continued neck and neck and the atmosphere in the Mars Minerdome was intense, and Marvin King-Davis and Davon Usher combined well to add some more excitement to the offense. The second quarter saw Marvin shooting the ball at an exceptional 83% and Craig Moller at 80%. Unfortunately for Ballarat, late in the term, big men Marvin King-Davis and Chris Smith were both in foul trouble, notching up 3 personal fouls each. At the main break, the scores were again tied, 47 a piece.

The third quarter saw Ash Constable open the scoring, with a big 3. The Ballarat Miners managed to outscore the Bendigo Braves through the term, 18 – 14 and went in to the last term, 5 points up, 65 – 60.

In the last period the intensity within the team lifted once more, Pete Hooley and Chris Smith were ferocious at the ball. The GMHBA Ballarat Miners finished strong to get a 14 point win over the Bendigo Braves, 87 – 73.

Offensively the scoring options were vast, with so much of the roster contributing, Head Coach Eric Hayes thought the guys were really smart the way they played, and found the right person to give them the opportunity to score. He was pleased that they were able to share the ball around.

Eric noted the team was in a nice rhythm with Marvin King-Davis on the court, things kind of changed when he had to come off the court, Hayes said that he was rebounding really well and offensively gave the Miners a great target.

Across the board, Hayes and his team, really made it hard for the Bendigo scorers to get looks and that’s what they said before the game, make it hard for them to score, nothing easy.

The Miners didn’t allow Bendigo any fast break points and Hayes thought that offensively they did a great job of running the offense and being smart and getting the right shot. Hayes added, “its hard for the opposition to break when people are taking care of the ball and getting good shots”. Eric thought the way they played, made it tough for the Braves to get into a rhythm or to get out and run.

The Ballarat Miners take on the Albury Wondonga Bandits at the Mars Minerdome next Saturday, 6 May 2017, tip-off 8pm.