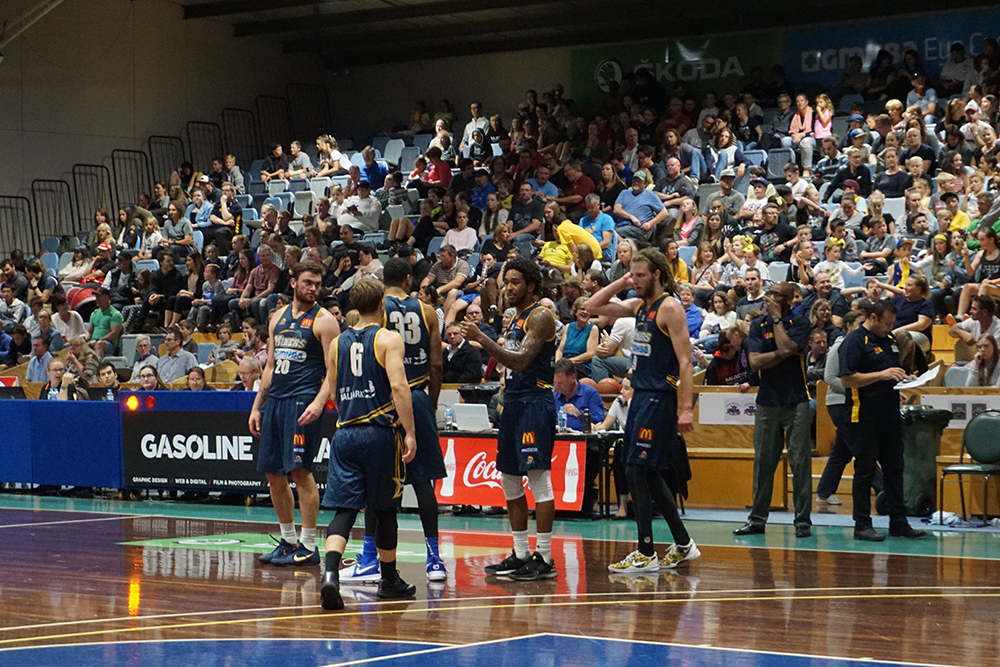 The GMHBA Ballarat Miners held off Kilsyth at the Minerdome on Sunday afternoon, to claim their second win of the weekend.

Pete Hooley was instrumental in the 81 – 76 win, with 28 points and 3 rebounds. The Miners weekend inclusion, Tim Coenraad put 21 points on the board, with 6 rebounds. Cam McCallum was vital with 11 rebounds, 4 assists and 3 steals.

Despite only an hour’s sleep, fresh from Melbourne United’s trip to China, Sam Short managed 3 assists and showed an increased confidence on the court.

Kilsyth Cobra’s Tariq Naqqash was their top scorer on 17 points and Kieran Murphy followed on 11 points.

Hooley opened the scoring of what would be a tight first term, shooting the ball at 33% they entered the first break, up 17 – 16.

Early in the second, big Chris Smith committed his third foul and was forced to take a seat, Cam McCallum stepped it up and was courageous at the rim. The Miners were able to force the lead out to 10 points at the mid way point in the term and finished the second 49 – 42.

Defensively Davon Usher was great early in the third, with a great block and the Miners then forced Kilsyth to run their shot clock out. Hooley then extended Ballarat’s lead to 60 – 46 midway through the term. Coenraad showed his ability toward the end of the quarter with some impressive defensive work, which ultimately resulted in a big 3 to keep Kilsyth at bay.

Kilsyth slowly worked their way back in the fourth, and managed to be only a shot away late in the period, 78 – 76 entering the last 10 seconds of the game. The Ballarat Miners however were able to hold on and come away with 7th win for the season and cement their spot high up on the ladder, 2nd on the South Conference ladder.

Assistant Coach Nathan Cooper-Brown said, “we got the shots that we wanted to, obviously the percentage was pretty disappointing (at 37%) but we have those nights” He was happy about the process, that the side really worked hard offensively, with good ball movement and good player movement. “We got enough to get over the line but we obviously want to shoot better than that in the future”.

On game MVP Pete Hooley, “he is an incredibly smart basketball player, in particular his understanding of his own strengths and how to utilise them” said Cooper-Brown.
Including a high calibre player such as Tim Coenraad in the side, Cooper-Brown thought they were in a really fortunate position that he could come on board. “A really great guy, high character who slotted in seamlessly which is something really difficult to do when you come in for a weekend” said Nathan Cooper-Brown.

Coenraad “found some rhythm in our offence and played to his own strengths, hit some threes and had some great pressure on the rim in transition, he was a big bonus for us and definitely a contributing factor to 2 great wins” said Cooper-Brown.

Cooper-Brown noted that his side has “some KPIs about rebounding that we know are essential to our performance and not getting that today showed on the scoreboard with the margin not being as much as we wanted it to be”.

Going forward, Nathan Cooper-Brown noted “a win is a win, but we are playing to improve”.

Offensively he knows the Miners have got a lot of weapons, which is a real bonus, but “we’ve got to try to add a defensive intensity that stays with that – so you don’t end up running and gunning with teams, continue to get stops down one end and utilise this great offense that we have, that’s how we build leads.”

Davon Usher suffered a corky late in the game, Cooper-Brown is confident; he should be okay for the next game.

The Ballarat Skoda Rush, however suffered a big defeat at home, 55 – 80 to the Kilsyth Lady Cobras.

The Rush stayed with Kilsyth in the first term, with Ash Spencer and Jaterra Bonds contributing well to the scoreboard. Rebounding was a big focus for the team and they managed to stay close to Kilsyth, with 7 boards to their 10. Ballarat ended the first term 19 – 23.

Early in the second term, Jaterra unfortunately committed her third personal foul and Coach Flint had her sit out for the remainder of the half, however the Rush side did manage to lift their intensity despite an important member of the team sidelined.

At the main break, Kilsyth’s lead was out to 15 points, 29 – 44. Kilsyth had massively out-rebounded Ballarat, 22 to 10, and had added 11 points from Ballarat’s turnovers.

Head Coach Dave Flint’s main goal for today was effort and “I thought we came out and looked good. First quarter we were down 4 but I loved the way we played at both ends and with 5 to play in the first half we were only down 8 and we just had that lapse” to enter the main break down 15 points.

Flint knows its tough when you haven’t won a game yet and you play one of the top teams, however he was pleased his side stayed in the game for the most part of the first half, unfortunately noting “we haven’t done a good job of running out games this year”.

Having Jaterra Bonds in foul trouble early, Flint was happy to see the effort from the team for the next 3 – 4 minutes. He also noted “its good for our younger players to play with her and without her and I am really pleased to have given them to chance to play and how well they are playing.

On the rebounds, Flint noted Joy Burke “is a huge out but we have to find a way to pick up the slack collectively, and we didn’t do a great job at that” finishing the game with 26 boards as opposed to Kilsyth’s 45.

Its tough to beat a top placed team when they put up more shots, Flint posed.