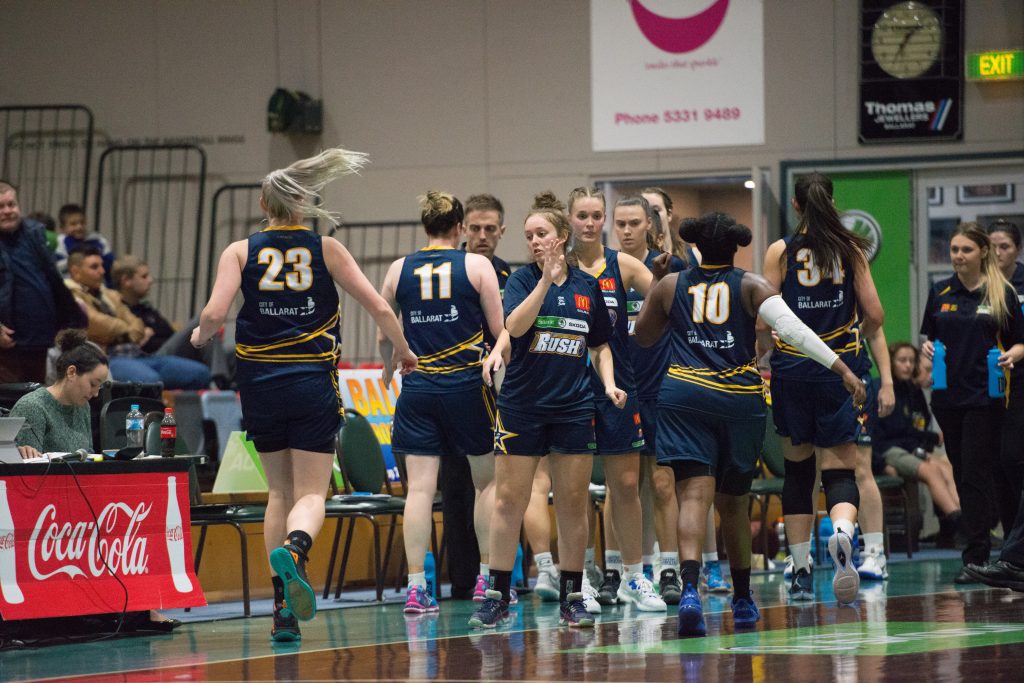 Ballarat’s Jaterra Bonds played an excellent game, with 35 points, 10 rebounds, 5 assists and only one turnover. Ashleigh Spencer made 11 points, and despite being in foul trouble Joy Burke was able to take 7 boards.

Ballarat were obviously concerned with such a great late inclusion in Mikaela Ruef, who flew in from Los Angeles, after trailing with the Los Angeles Sparks (WNBA side) at 7am Saturday morning. She did however appear jetlagged on the court, and finished the night, 0/13 and only 4 points from the free throw line.

Rush Head Coach Dave Flint’s message to his side in the first term, was to keep persisting with the second, third and even fourth opportunities. It was vital for them to continue to move the ball around offensively, to give them more options to make the right shot.

At the first break Hobart’s Dwain Davie stressed to his side that they were allowing too many un-contested shots, but aside from that he was happy with the Chargers’ defence. The Chargers spoke about using the perimeter more in the offence as they did not want to rely on the points in the paint for the entire game.

The Rush entered the second term, 21 – 18. A string of missed shots caused Dave Flint to call a time out at the 7:24 mark. He spoke to the team about a lack of effort, he was concerned about the disparity between Ballarat and Hobart’s offensive boards, 6 -21 at that stage of the game. His message to the Rush was to increase the effort, and if the shot is missed ensure you get that offensive board to reset.

Hobart sought to pause the game with 1:41 remaining, Davie asked his side to slow it down for the last few possessions. Trailing by 2 points, he asked the Chargers to improve offensively and utilise the perimeter again. Instantly Ruef sought to implement that, but come up short.

Dave Flint noted in the last timeout of the quarter, how important it was in this stage of the game to get the last shot. He asked the Rush to place importance on getting the stop and making sure that ball is in Ballarat’s hands in the last few seconds. Jaterra capitalised on that and made sure the Rush lead by 4 at the main break.

At the half, Ballarat lead, 38-34 Coach Flint though the Rush did a great job outscoring Hobart in that last term, especially having Ashleigh Spencer and Joy Burke in foul trouble and sitting on the bench. He did note however that Hobart’s offensive boards were killing Ballarat, 16 – 4.

The third quarter saw Joy Burke make 6 points, and contribute to Ballarat the quarter, outscoring Hobart, just 18 – 14. At the final break Flint mentioned this to his side, but urged them not to be complacent. He stressed the importance of restarting the offences, if they are not working and continue to pass the ball around to get the right shot selection. Rebound wise, Kathleen Scheer was now at 12 boards and Flint told his side to not let her get the ball from the rim.

Into the fourth term, Ballarat lead 56 – 48. Hobart started quickly, which had them cut the lead to 2 by the 7 minute mark, causing Ballarat to call for a timeout the reassess.

Flint was very cleat in what he wanted the side to do, simply man-up on your player and do not let them get the easy possession. He asked his side to utlise the tall Burke inside offensively.

A tough quarter, with the lead hovering around the 3 point mark for most of the term, saw Flint call his final timeout with 2.19 remaining. The message from this break, was to create space offensively.

With under a minute to go, Jaterra created that space and extended Ballarat’s lead to 5, and then with 18 seconds remaining she cemented the victory a slick steal coast to coast layup she made look easy.

The Ballarat Rush took the win over the Hobart Chargers, 73-63. Jaterra Bonds was named game MVP.

Post game, Dave Flint was delighted to get the win, by 10 points. He paid testament to the great third term and his team’s depth and their ability to play with 2 key players in foul trouble. Great to get that first win at home, and 2 wins in a row said Flint.