The Selkirk Ballarat Rush and Hotondo Homes Ballarat Miners will wrap up their regular season with a home game against the Melbourne Tigers this Saturday night.

The Rush face a Melbourne side that sits 10th on the ladder with an 8-10 record. The Tigers need a win and other results to go their way to sneak into the playoffs, so the girls will be expecting a tough game.

For the boys they welcome Melbourne who sit seventh on the ladder with a 10-8 record and are led by former Miner Nic Pozoglou. 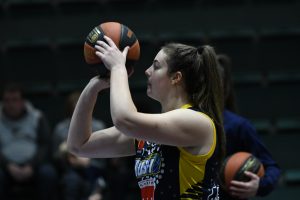 To mark the end of the season both teams will also wear throwback jerseys to celebrate Miners and Lady Miners championship teams in years gone by.

The Rush will represent the former Lady Miners brand and their 1999 championship, while the Miners will wear jerseys reminiscent of their 1989 championship year.

Following a tough loss to Waverley last weekend, the Rush will be looking to end their season on a high note with a big win over Melbourne.

Monique Conti (20.4 points, five rebounds and four assists) and Louella Tomlinson (16.3 points, 10.7 rebounds and five assists) stand in their way though, the guard and centre combo being their most consistent contributors this season.

Preventing these two players from impacting the game will go a long way to the Rush securing their eighth win of the season.

Melbourne only averages 73.4 points a game, so a lot of their scoring load comes from Conti and Tomlinson. Forcing other players to make plays on that end of the floor helps the Rush keep their scoring down and find easy looks in transition. 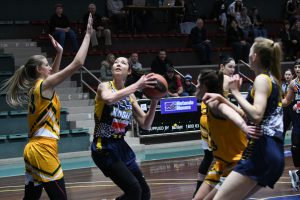 Forcing their top players into bad shots or getting the ball out of their hands will keep their percentages low and allow the girls to put scoreboard pressure on them.

On the offensive end for the Rush, good ball movement and attacking the rim has been their recipe for success in the last few weeks and it will be needed again on Saturday night.

Joy Burke and Lucy Cochrane enjoy a height advantage over Melbourne’s talls, so the girls will no doubt be looking to take advantage of this and feed the ball inside and put the Tigers defence under pressure.

This height advantage will be required on the boards also, with Melbourne being the second-best rebounding team in the NBL1, averaging 40.9 a game.

Preventing them from grabbing their 12 offensive rebounds a game will help stall their scoring output and allow the Rush to go on big runs that have helped them win games this season.

The Miners will be looking to do the same thing as they try to enter the playoffs in winning form after a loss to Waverley last weekend.

With Ross Weightman, Josh Fox and Marqueze Coleman expected back, the boys will look to hit their stride with a full roster entering the business end of the season. 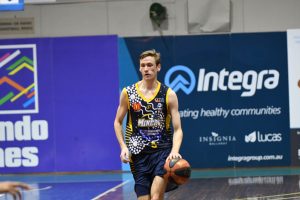 These players have been Melbourne’s top scorers, and after the boys gave up 90 points last week, the Miners will be keen to shut them down and keep them to the 65 to 75-point mark that they have done so often this season.

A big step in fulfilling this is to keep the Tigers off the offensive glass, coming into the game averaging 14 offensive boards a game, second best in the league.

Being able to keep them to one shot a possession and finding easy buckets on the other end, getting the crowd involved and riding a wave of momentum will be huge for the Miners.

Similarly, the boys are the fourth best offensive rebounding team in the league with 13.4 a game, so being able to pressure the offensive glass as they have all season will keep the scoreboard pressure on and get Melbourne’s confidence down on the road. 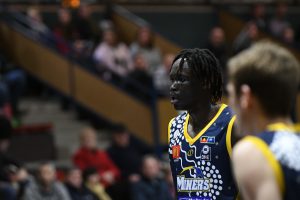 Despite the loss last week the increased minutes for the bench players and youth league stars like Blake Allison saw some solid performances, which entering the playoffs is a great sign for the teams depth.

When called upon Brendan Joyce will no doubt expect a similar impact from these guys on Saturday night, especially against Melbourne who only played two players off the bench last weekend.

Being able to put on some fresh legs and outrun the Tigers will go a long way to their 17th win on the season.

The Rush tip off at 6:00 pm followed by the Miners who start at 8:00 pm at the Mars Minerdome.