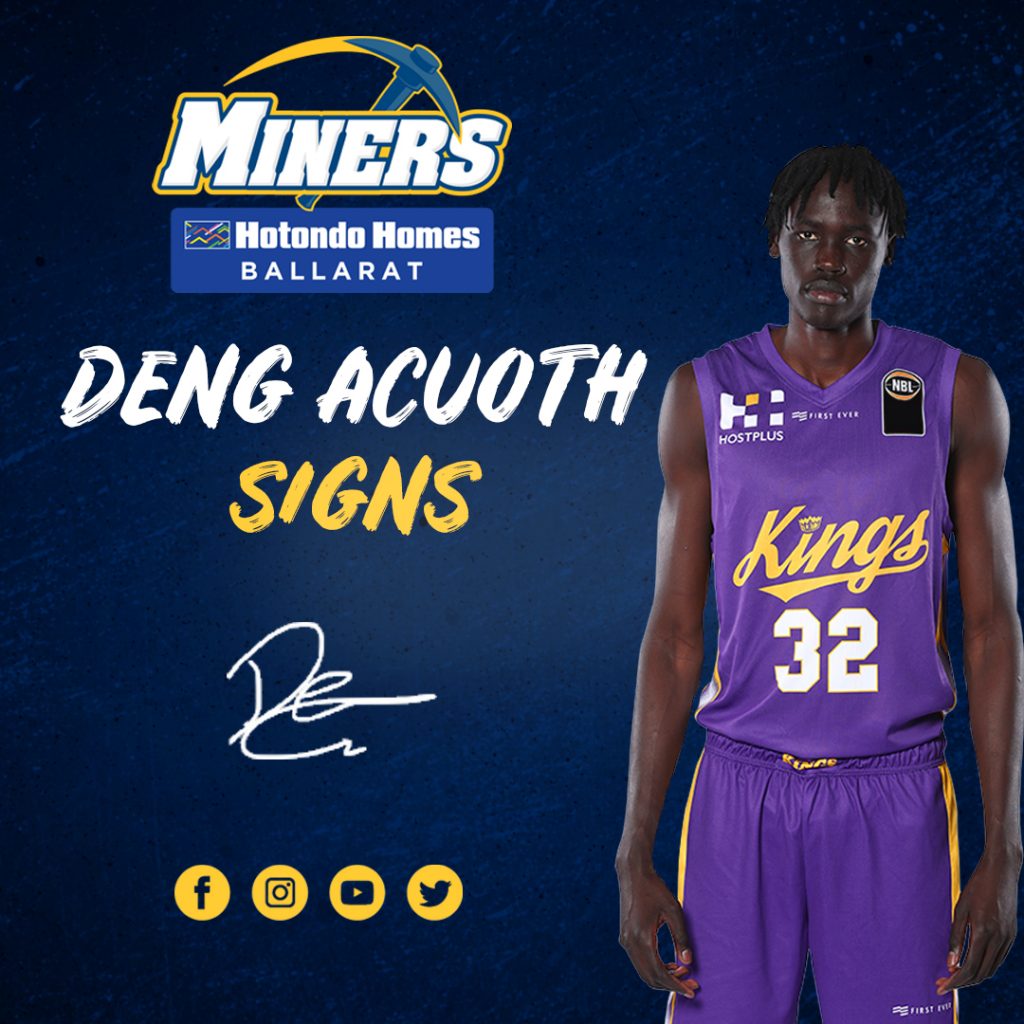 As the NBL1 2019 season fast approaches, the Hotondo Homes Ballarat Miners have continued to add to their depth with the key signing of Sydney Kings team member, Deng Acuoth.

His story is an inspiring one, as his journey to this point has not been easy. Born in South Sudan, he was six when he left his Kenyan refugee camp to begin a new life in Australia.

In 2013 he picked up a basketball for the first time, and just four years later was signed as a development player with the Sydney Kings for the 2017-18 season.

Coming off a season on the main roster with the team, Acuoth finds his way to Ballarat, and the 22-year-old says that he is excited to join the Miners and begin this journey with his new teammates and coaches.

“I am very excited to come and play for the Miners. We have a nice group of guys that are ready to win, a great coach in Brendan and a great community behind us,” he said.

Acuoth’s manager David Moldovan echoed this sentiment, speaking highly of head coach Brendan Joyce, the association and what they will be able to do for a young talent such as Deng.

“Deng is one of the brightest talents in Australian basketball. He is still so raw, but his upside is tremendous, so it was a no brainer to send him to Brendan, one of the most knowledgeable and respected coaches in the country,” he said.

Standing at 208cm tall, Acuoth has a lot of upside with his athleticism and natural ability. However, he says that his offensive skill-set and leadership have been things that he has worked on coming into the season.

Coach Brendan Joyce has welcomed the signing of Acuoth and is excited to work with him and continue to develop his game.

In his talks with Andrew Bogut, who Acuoth scrimmaged with regularly in Sydney, he found out the areas that Deng needs to improve on this season, which is exciting for the team.

“I love working with athletic players with length and that’s exactly what Deng is. He will play an important role for us at both ends of our team structures this season,” he said.

After averaging 10 points, 10 rebounds and 2.6 blocks per game in the now defunct SEABL competition with the Melbourne Tigers, Basketball Ballarat is excited to see what Acuoth can bring to the Miners in 2019.