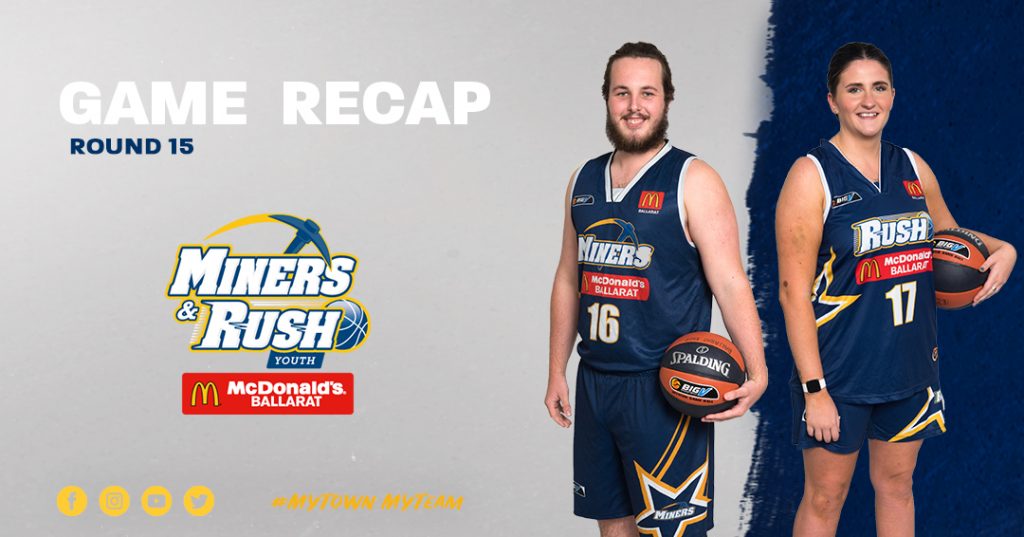 The McDonald’s Ballarat Youth Miners and Rush were busy over the weekend playing both Saturday and Sunday.

Trinity Skenderis had a sensational 1st quarter with 15 points (4/6 3PT) and forced them to play a box and one on her for the remainder of the game.

Trinity’s play didn’t stop on the offensive end as she was locking down on defense and recorded 4 steals.

Mackenzie Nicholson contributing with another double double (11pts, 16 rebs) and Amelia Jarvis was doing business as usual by cleaning the glass with 14 rebounds.

Unfortunately for the Youth Rush, they did not get the win (61-72).

Youth Rush was quickly looking at the next contest against Diamond Valley to turn around their fortune.

Laura Taylor joined the squad at the MARS Minerdome on the Sunday, she dropped 22 points and nine rebounds while Trinity kept up her high level with 12 points and seven rebounds.

Silly turnovers were again a focal point for the Youth Rush allowing Diamond Valley to make a stretch late in the game.

“Sunday we played 3 quarters, we had a lead early in the 3rd and then we lost momentum late in that quarter with making silly turnovers which allowed them to come back and then they ran away with the win” Trahair said.

The final score 54-74 in favour of Diamond Valley.

The Youth Rush play Bendigo (Away) on Saturday Night at 6pm then back at home the following day versus Altona at noon.

Youth Miners played Saturday night against Corio Bay at the Geelong Basketball Netball Centre and it was a tight battle all the way through.

Amos Brooks lead the way for the Youth Miners with 18 points and twelve rebounds and had help from Bol Bak (16pts , 13 rebs) and William Hynes (16pts, 7 rebs).

Jordan O’Leary from Corio Bay (19.1 PPG), made it difficult for the Youth Miners on this occasion scoring 26 points and dishing out four assists to his teammates.

Lucky for Youth Miners, they can put that loss behind them as they got back onto the court at home the next day to redeem themselves.

The rare loss did something for the Youth Miners, as they put 121 points up on the score board with 7 players reaching double figures.

Blake Alison back from his NBL1 duties, almost had a triple double 14 points, ten rebounds and nine assists as Bol Bak top scored with 20 points.

It was an overall effort from the Youth Miners to secure the win 121 – 71.