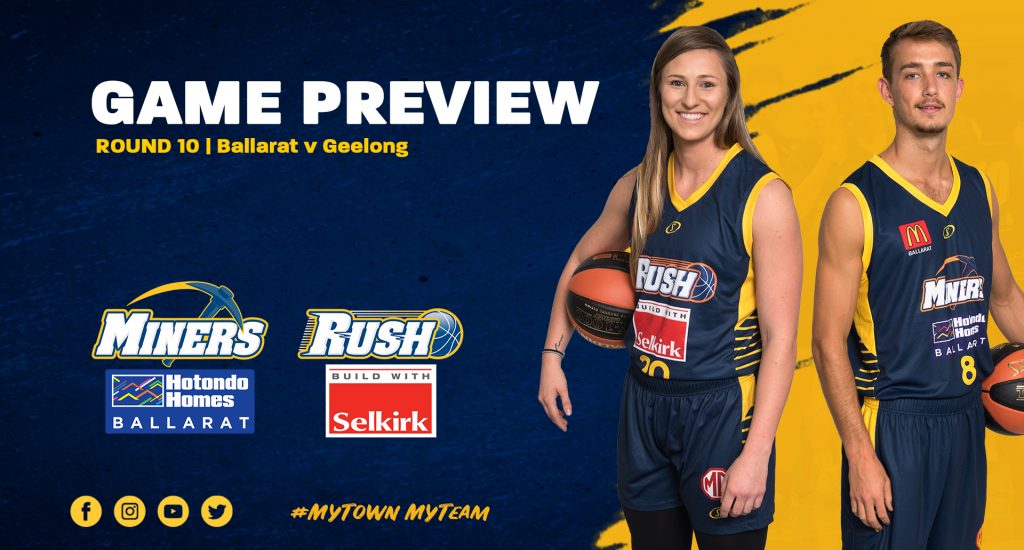 The Hotondo Homes Ballarat Miners and Selkirk Ballarat Rush return to the court this weekend as they travel to Geelong to face their Victoria country rivals, the Supercats.

Following two weeks off the teams will head to Geelong Arena for the country showdown, the Rush kicking off at 5:00 pm followed by the Miners at 7:15 pm.

The boys enter the fixture 10-2 and on top of the NBL1 ladder, but they come up against a Geelong side that sits third on the table at 9-5 who have won four games in a row.

Their good form has been thanks to DeMarcus Gatlin who has led the team with 21.7 points, eight rebounds and four assists a game and will be a key matchup for the Miners backcourt, but their deep bench is another key to their strong record.

Playing as many as six on the bench during the season, these players have added 16 points a game for Geelong, scoring 20 plus on three occasions.

With such a deep team that can bring on fresh legs to pick up the slack, the Supercats present a different dynamic than most teams, which can be dangerous in a potentially close matchup.

Coach Brendan Joyce spoke about this during the week, saying Geelong’s experienced side will be a good test for the Miners after the break.

“They’re pretty talented, they’ve been together for a long time, they play well together, they’re a pretty big team … so we’re going to be in for a pretty tough game, we know that,” he said.

They’re deep roster and size has helped them to become the best offensive rebounding team in the league with 16 a game. The Miners are strong in this category also with 13.3 per matchup, so it presents itself as a potential game winner for both sides.

The Miners are a strong side on the defensive boards led by Deng Acuoth and Josh Fox, but they will not be able to rest on Saturday night if they want to keep Geelong away from any second chance points.

Fox says it will be a tough game for himself and Acuoth but they are excited by the challenge that Geelong presents.

“I’m excited, they got a couple of guys that are pretty good … so we’ll be ready for it, we’ll be excited to play against them but they’re going to be a tough matchup for us,” he said.

If the boys can prevent these second chance points, it will go a long way to a win, as Geelong shoots the ball at just 40% from the field, 25% from three and 63% from the free-throw line. This will stall the scoreboard and allow the Miners to score quickly and put the pressure on them.

This has been the key for the Miners to this point and why they almost pulled off the come-back against Frankston in their last game, being able to lock down defensively and go on runs that put teams away quickly.

The Selkirk Ballarat Rush will be looking to continue their winning form after taking five of their last six games.

The task doesn’t get any tougher though than a matchup with top of the table Geelong, who come into the game with a 13-1 record.

Ezi Magbegor (18 points and seven rebounds) and Zitina Aokuso (17 points and eight rebounds) have been the shining lights for the Supercats and will be key matchups for the Rush who are looking for back-to-back wins.

Both players are forwards standing taller than 190 cm and a lot of their offense in the half court runs through them. Joy Burke expects a tough game on the defensive end but is ready for the challenge.

“I think we matchup pretty well against them, with me, Lucy and Claire the three of us have the height and the size so it’s just about staying out of foul trouble … and to play strong and play smart,” she said.

Shooting efficiency and scoring is very even for the two sides but it is the defensive end that Geelong has dominated this season. They have only allowed 65 points a game, sitting in the top three in steals (10.3) and blocks (4.6).

Olivia Hackmann will be key to keeping the scoreboard ticking over for the Rush, averaging 31 points in her last two outings. This won’t be enough though, the girls needing an even contribution from everyone to make their defence uncomfortable and knock over the top side.

This is when the Rush have been at their best, with assist numbers high, multiple starters hitting double figure scoring and players coming off the bench like Claire Blower, Claire Constable and Georgia Amoore being able to impact the game.

This has become a regular part of the girls game in the last few weeks and has helped them to a strong record. Burke says that their confidence has lifted and their belief in each other is strong because of this.

“It’s fun to play a top team because most people aren’t going to expect you to do anything great, but we just believe in each other and we’re going to go after it,” she said.