The Selkirk Ballarat Rush have won back-to-back games for the first time this season, defeating the Basketball Australia Centre of Excellence (BA COE) 68-56 on Saturday night.

The Hotondo Homes Ballarat Miners couldn’t repeat the effort however as they fell to their first loss of the season, going down 77-80 in overtime.

It was a tale of two halves for the Rush, going into half-time down by 10 points, but they were able to keep the BA COE to just 17 points in the second half and erase a 10-point deficit to run away with a 12-point win. 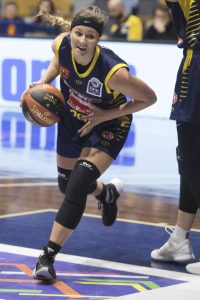 After starting the game 1-8 and giving the BA COE a 12-2 start, the girls kicked into gear and kept the game within reach, only going into quarter time down by two.

The second quarter saw more struggles from the field however, going 0-11 from two-point range and 2-8 from the three-point line.

Free-throws were keeping the girls in the game, able to get to the line and knock in seven free-throws to keep the margin at a manageable 10 going into the half-time break.

The second half was a completely different game. The defence led by Cochrane was hard and smothering, not giving the BA COE any easy shots, while the transition offence was fast and effective.

After cutting the margin to five midway through the third term, a 13-0 run gave the Rush an eight-point lead and they looked like a new team.

Tough defence inside the paint got the ball rolling as the crowd started to find its voice, Chanise Jenkins putting pressure on the young BA COE side in transition.

Jenkins and Hackmann started to find their groove as their shots started to fall and BA COE was forced to take a timeout.

It was too little too late though as the damage was done. The margin got as close as three mid-way through the fourth, but an 11-0 run in the middle to late stages of the final quarter put the game to bed led once again by Joy Burke.

She piled on seven of those 11 points to carry her side to victory, very similar to last week against Eltham.

The Miners weren’t able to follow Burke’s example, as a fast finishing BA COE were able to pinch a three-point overtime victory.

Similarly to the women’s game, it was a tale of two halves, with Miners exploding out of the gates and taking a 10-point lead into half time, but the BA COE clawed their way back to hand the boys their first loss of the season.

As has been prevalent in every game for the Miners this season, a big scoring run helped them to a strong lead early in the first quarter.

An 11-0 run to take a 19-11 lead kickstarted the men’s early dominance on the game as their defence locked up the BA COE on the other end.

The hot shooting to start tapered off however. After this strong first quarter shooting 50% from the field, the Miners went 35%, 35% and 33% in the following three quarters. 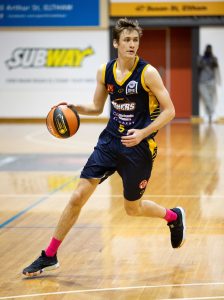 A top three shooting side in the league, going at 47% on the year, a lull was to be expected. The BA COE slowly started their revival on the back of this poor shooting, winning the second and third quarters by one and four points respectively.

The Miners were finding ways to counter their poor shooting, but the boys from Canberra always seemed to answer with a run of their own to keep them in the game.

An 11-2 Ballarat run to start the third seemed to almost put the game away, with a Deng Acouth three getting the crowd involved as the lead got out to 17.

It was matched however by a game saving 23-2 run by the BA COE in the late stages of the third and early parts of the fourth, seeing the lead evaporate and a six-point deficit facing the Miners.

Evans Jr. led the fightback with a big three and a huge transition dunk following an Acuoth block to get the crowd pumping and grab the lead back.

A back and forth final few minutes led to the game being tied at 73 for the final possession, but the Miners defence held firm, almost forcing a turnover and pushing them into a missed contested three to take the game to overtime.

Both teams shot the ball poorly in overtime, both going 1/7 from the field. The difference came at the free-throw line as the BA COE knocked in five to the Miners two.

A tight affair for the first four minutes, Tamuri Wigness put the Canberra men up by two with 41 seconds left. Evans Jr looked to answer going hard to the hole but his shot was no good, Acuoth followed with a timely rebound but was blocked on the tip in attempt.

Hyunjung Lee went 1/2 from the free-throw line on the other end to give them a three-point lead but the Miners still had a chance. Captain Sam Short took a deep three to tie but it was no good on the buzzer.

The Miners now go to 7-1 as the Rush climb to 2-6, as they look towards a big double header next weekend against North West Tasmania at the Mars Minerdome on Saturday night, then travelling to face the Southern Sabres on Sunday afternoon.