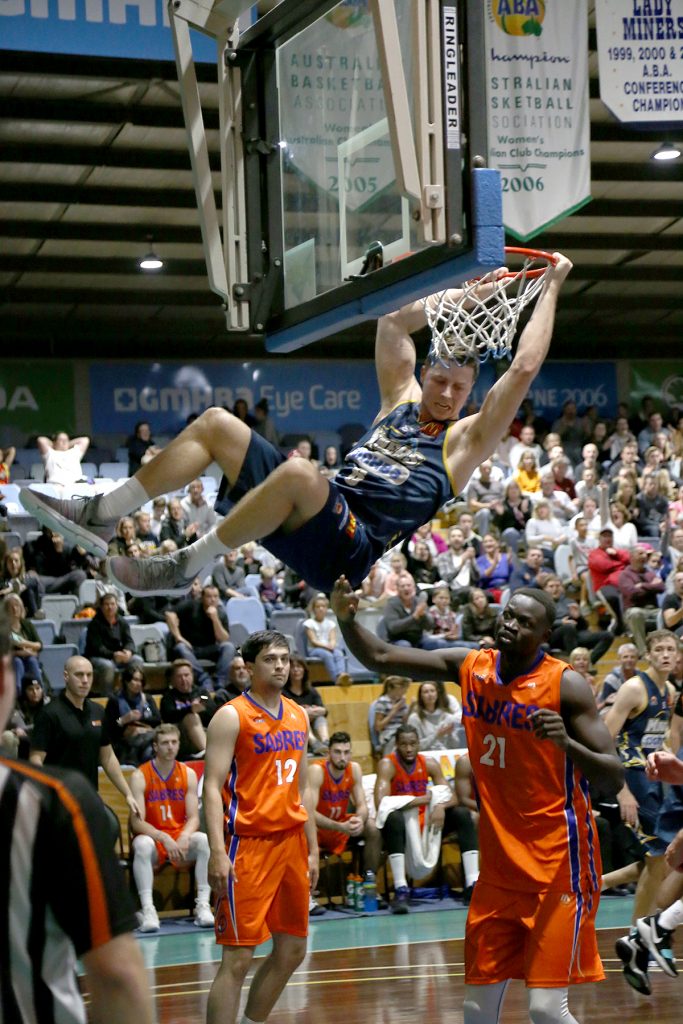 The Ballarat Miners cemented their spot high up the SEABL ladder after defeating Sandringham, 91 – 80 on Saturday night.

Game MVP and Ballarat Captain, Peter Hooley was practically perfect with only one turnover, 25 points, 6 rebounds, 8 assists and 4 steals to lead his side to victory.

Ballarat came out firing and had a great first quarter in the offensive end, with Pete Hooley and Sam Short making 16 points between them. At the first break they led by 14 points, 29 – 15.

The Miners really took advantage of all their opportunities, and by half time 20 points had come from Sandringham’s errors. Pete Hooley was leading all scorers, even at half time with 17 points.

The third term saw Davon Usher come out firing, shooting well from beyond the arc, the final break saw him with 19 points to his name. Ballarat extended their lead to 71 – 56, with one last term to play.

The Miners finished the game, 11 points ahead of the Sabres. A very even contribution from the side, with Davon Usher on 19 points, Nic Pozoglou on 14 points, Marvin King-Davis on 12 points and Josh Fox on 9 points!

Sam Short played a great team game with 8 assists and 8 points for Ballarat.

The Miners played fast team basketball, with 36 fast break points, 18 from the bench, and only 9 turnovers, which pleased Coach Nathan Cooper-Brown.

Cooper-Brown noted that his team are stringing 4 quarters of basketball together well, sharing the ball and playing how they want to. He also credited the Sabres, as tough opposition and thanked the home crowd for inspiring the team.

The Ballarat Rush however, just fell short in the final term to Sandringham, bringing their season to 2 wins, 4 losses. Sandringham took the win away from Ballarat, 66 – 73, with former Ballarat player Rachel Jarry finishing on 14 points and 8 boards.

At the first break, Ballarat had a 2 point lead, with Courtney Walker shooting an incredible 100%, 6 points and 4 boards. Kristy Rinaldi was leading by example with 8 points at quarter time.

Halftime saw the Rush down only 4 points, 35 – 39. Kristy Rinaldi leading all scorers on 15 points, followed by Courtney Walker on 10 points. However, Ballarat’s field goal percentage was low at the main break, only 36%.

Rachel Jarry was hard to stop for Sandringham, and at the third quarter break she had 12 points, assisting the Sabres with their 7 point lead, 51 – 58.

The fourth quarter saw the game slowly slip from the Rush’s grasp and Coach Eric Hayes called for a timeout with just under 2 minutes to go, down 6 points. But unfortunately the game couldn’t be won and Sandringham took the win, 66 – 73.

Captain Kristy Rinaldi was the game MVP and noted that her team worked hard, but not for the full forty minutes. She spoke about how the team is on the same page sometimes, but needs to be for the whole game. Rinaldi noted that they simply let Sandringham take too many shots early, and then the Rush couldn’t close out.

Going into next week against Frankston, who sit bottom of the ladder, winless for the season. Rinaldi spoke about the need to work on defence and to get it right from the start of the game.