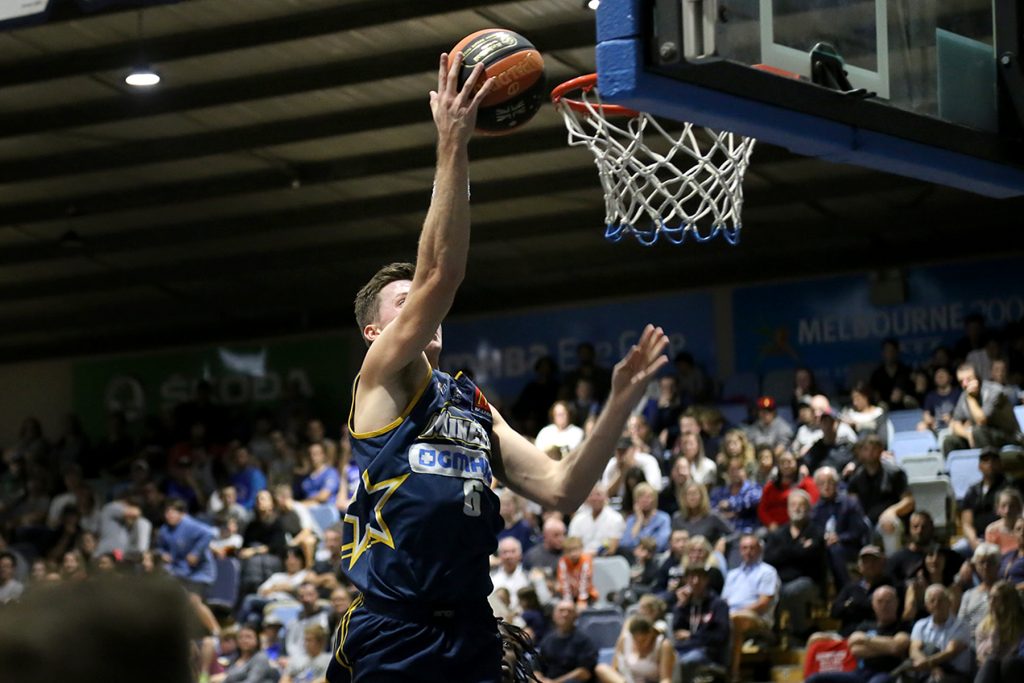 The Ballarat Miners defeated the Geelong Supercats 97 – 88 to claim their first loss for the 2018 SEABL season on Saturday night at the Mars Minerdome.

Game MVP and Miners Captain Peter Hooley contributed 21 points and 9 assists to his side to assist with the win. Offensively Davon Usher was strong with 22 points and Marvin King-Davis finished with 14 points and 11 rebounds.

It was hard to stop Geelong’s John Davis, with his 33 points and 15 rebounds and returning import Demarcus Gatlin, who finished with 16 points and 10 rebounds.

Newcomer Michael Luxford was also handy for the Supercats with 7 assists and 12 points to end the game.

It was a close game, with the Supercats taking the lead at the first break, 25 – 28, and 7 Geelong Supercats contributing to their scoring. The Geelong side shot excellent, at 64.7% as opposed to the Miners 42.3% testament to why they finished the quarter just ahead.

By the main break, the Ballarat Miners had regained the lead, 51 – 45.  The Miners has capitalised on the visitor’s turnovers, taking 11 points from the Supercats’ errors.

Ballarat’s big man Cam McCallum at this break had shot the ball at 100%, with 6 points and 4 rebounds with only 6 minutes on the court.

But by the end of the game, Ballarat had proved that their bench has a lot of depth, contributing 19 points to the end score, and only 9 of Geelong’s points coming from the bench.  Ballarat played an unselfish, fast paced game, which was a delight for the home crowd to watch.

The Ballarat Miners also took advantage of all opportunities, with 22 points coming from their second chances, and only 9 from the Supercats.

Unfortunately the Ballarat Rush did not finish Saturday night victorious. Geelong proved too strong, taking a 17 point win over Ballarat, 84 – 67 despite a good shot for shot start to the game.

Joy Burke finished the game with 7 rebounds, 2 blocks, 3 assists and 10 points despite being fouled out late in the game. Ashleigh Spencer assisted offensively with 11 points.

Geelong’s Isabella Brancatisano was effective on 20 points and 9 assists, with Ebony Rolph also with a handy 16 points and 11 rebounds.

Turnovers hurt Ballarat, with Geelong’s ability to score from the Rush mistakes added 18 points to their final score.  By the end of the game Ballarat finished with 19 turnovers.

Geelong’s ability to make sure they utlised their shot clock was incredible, making the shot with the last 2 or 3 seconds on the clock regularly really seemed to tire Ballarat, and Geelong were also able to make 20 second chance points as opposed to Ballarat’s only 10.

The first quarter for Ballarat was good, and the Rush were only down by 4 points, 18 – 22, with Molly Matthews leading scorers on 5 points.

Fouls started to hurt the Rush in the second, with 10 personal fouls committed by the main break and Geelong only having 1 to their scorecard. Geelong were dominant through this term and at the half, the Rush trailed by 13 points, 33 – 46.

The reigning champions were too strong offensively and managed to maintain their lead and defeat Ballarat, 67 – 84.

The Miners and Rush head on the road to take on Albury-Wodonga next weekend and will be back on home court to take on Sandringham on May 12. Get your tickets here https://www.trybooking.com/book/event?eid=357170&