The Selkirk Ballarat Rush and Hotondo Homes Ballarat Miners hit the highway this weekend for the final two games of their five-game road trip against Kilsyth at the Kilsyth Sports Centre and Eltham at Eltham High School.

Coming off one of the biggest wins in the clubs history with a 63-126 win over Albury Wodonga last weekend, the Miners come up against their toughest opponent to date, the highly fancied Kilsyth Cobras, with tip off scheduled for 7:30pm.

Sitting second on the ladder at 6-1 and led by former Miner Peter Hooley, they have had a strong start to the season, sitting top five in scoring with 90.6 a game.

Hooley will be a key player that Brendan Joyce will want his team to shut down, averaging 19.3 points, four rebounds and six assists a game. His Melbourne United teammate Tohi Smith-Milner will be another to pay close attention to, averaging 17.3 points and nine rebounds a game. 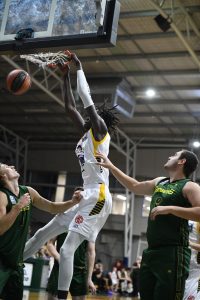 Coming off his best game of the season (20 points, 15 rebounds and 11 blocks) Deng Acouth will share responsibility with Josh Fox for the dangerous Smith-Milner, while Sam Short, Hooley’s Melbourne United teammate, will no doubt get the role on the talented point guard.

Both teams score the ball at a high clip, the Miners leading the league at 96.8 points a game, while both sides shoot above 45% from the field and above 37% from three. Offense won’t be the problem for either side, it will be their defensive effort that will be key.

The Miners have kept teams to 75.4 points per game, one of the best efforts in the league, while Kilsyth have given up 82.8 points a game.

Acouth has been the anchor of this defensive effort, leading the league in blocks with 4.2, but as has been the Miners calling all year, it’s been a team effort.

Going against another strong offensive team, the boys will need to bring this whole team approach on that end of the floor again and allow their offense to reap the rewards of it.

Following this blockbuster clash, the boys will back it up on Sunday in their first back-to-back schedule for the season, facing Eltham at 2:30pm.

The 2-5 Wildcats will be playing off the back of a road-trip to Frankston the night before, so the Miners will be looking to take advantage of their tired bodies and putting on some scoreboard pressure.

They have allowed 96.4 points a game through their first seven games, one of the worst in the league, so the Miners will want to make the most of that.

With so many weapons on the Ballarat side, which has been evident with an even contribution from the entire roster, Joyce will want to move the ball and continue their consistent play to find the win on Sunday.

They do possess some offensive firepower however, averaging 90 points a game. Adam Doyle has led this charge, putting up 19.6 points, three rebounds and four assists a game, so he will be a key player to shut out of the game.

If the Miners can do this, the Wildcats don’t possess too many other top scorers, so it will go a long way towards a win.

Energy and activity on the boards will need to be high, especially in the second game of a back-to-back, to try and get in the heads early of a team who sits second last on the ladder.

The Miners average 40 rebounds a game, 12.4 of those offensive (top six in the league) compared to Eltham’s 36 and nine offensive.

The hunger and athleticism from Jerry Evans Jr, Acouth and Josh Fox will be important to keep the pressure on the Wildcats big men on both ends of the floor who have struggled so far this season to rebound the ball.

The Selkirk Ballarat Rush travel to Kilsyth on the back of two competitive performances but are hungry to get their first win on the board, with tip off scheduled for 5:30pm.

Following a 76-68 loss to Albury Wodonga, a game in which they led for large parts, the girls look to take advantage of a 3-4 Cobras side sitting 10th on the ladder.

Both sides are pretty even in the points column, the Rush averaging 70.8 compared to Kilsyth’s 75.4 points a game. The biggest thing that separates the two sides and what could be a game winning factor is the Wildcats offensive rebounding.

They currently sit fourth in the league with 13.6 offensive rebounds a game. Joy Burke and Lucy Cochrane will again have the big job of cleaning up the glass to prevent Kilsyth’s second chance points.

Sarah Booth has led the team in this aspect, averaging three offensive boards from her seven total rebounds a game.

The Rush have been one of the best defensive rebounding teams however, averaging a fourth best 29 a game, which is going to be needed again to keep Kilsyth to one shot per possession.

Guard pair Klara Wischer (15 points and seven rebounds) and Kara Tessari (12.7 points, two rebounds and two assists) will be players to scout along with Booth. 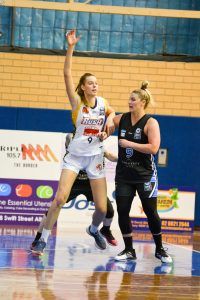 Lucy Cochrane looking for it in the post .
Credit: NBL1

They run into Georgia Amoore and Olivia Hackmann though who have hit a strong run of form in the last two games, going for 21 points, six rebounds, five assists and 23 points, five rebounds and three assists respectively.

Led by these two girls, the Rush will be hoping to continue to shoot the ball above 40% which they have in the last two games and limit their turnovers which were down to only seven two weeks ago week against Knox.

The girls will then join the men at Eltham on Sunday to face the Wildcats who sit 4-3 and ninth on the ladder, with tip off scheduled for 12:30pm.

Guard/centre pair Chelsea Schweers and Margaret Mulligan will be key players to stop, averaging 22.6 points and 17.3 points and 10 rebounds respectively.

The Rush will aim to take advantage of their strong rebounding in this matchup, averaging five more than the Wildcats 32.6 a game.

The Rush have been able to pull together lots of mini-runs in games so far this season that give them solid leads but have been unable to finish them off. Against a suspect defensive team, there is the chance for a game-winning run or big quarter to put the game away and get back-to-back wins.

The Miners and Rush will be looking for two wins each before returning home to the Mars Minerdome next Saturday night to face the Basketball Australia Centre of Excellence.