The Hotondo Homes Ballarat Miners and Selkirk Ballarat Rush have finished their five-game road trip on a high note, the girls going 1-1 for the weekend and the boys staying perfect with two wins.
The Rush entered the weekend with confidence that two wins awaited them, coming up against Kilsyth and Eltham who sat 10th and 9th on the ladder heading into the round.

Game one on Saturday night didn’t go as planned, going down 88-66 to the Cobras. It wasn’t all doom and gloom though, with four of the five starters hitting double figure scoring and the bench providing 12 points for the game.

The first and last quarters were the parts of the game that cost them, going down 23-15 in the first and 25-15 in the last. As has been the case for majority of the season, the girls were in the game for large parts of it but couldn’t put together a strong run to put them in the box seat.

Lucy Cochrane enjoyed her best game of the season so far on the offensive end, finishing with 13 points and six rebounds on 62.5% shooting. Chanise Jenkins was welcomed back from injury with 24 minutes off the bench and five points and five rebounds.

Both teams shot the ball evenly throughout the night, with the girls going at 40% from the field compared to Kilsyth’s 45.7%. The difference came in the offensive rebounds and the shots taken and made columns.

The Cobras were able to get secondary shots and put the defence under pressure, preventing the Rush from being able to get a run started with some easy baskets in the open floor.

This changed significantly the next night against Eltham, as the girls went 31/81 from the field with 19 offensive boards compared to 27/65 and 14 offensive rebounds from the Wildcats.

This helped them pull out a strong 80-72 win and get some reward for their effort in the last few weeks.

Jenkins was back to her best off the bench with 20 points, eight rebounds and six assists. Olivia Hackmann joined the party with 18 points, while Joy Burke added 12 points and eight rebounds.

The first quarter was even once again, the biggest lead being four for Eltham, but the Rush fought back to an even 20-20 score line at quarter time.

The second quarter saw the game-winning run we have been waiting for, the girls going on a 13-2 tear to start the term and take an 11-point lead. A quick-fire two from Jenkins to end the half gave them their biggest lead, going into the main break up 53-38.

Eltham bought the lead back to eight in the third-quarter following some poor shooting from the Rush, keeping them in the game.

Burke was instrumental in the final quarter to prevent a game-saving run by Eltham. When the Wildcats went up by one with four-minutes to play, she came alive with six straight points to take a five-point lead.

Georgia Amoore and Laura Taylor finished the game off with seven points between them to keep Eltham at bay and give the Rush their first victory.

The Miners continued their great start to the season with two big wins, including the top of the ladder clash against Kilsyth and former teammate Peter Hooley.

Another even team performance was massive for Brendan Joyce’s men, with four of the five starters scoring 15 or more points, including Josh Fox who was huge with 19 points and 18 rebounds. 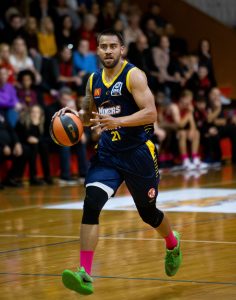 Josh Fox bringing up the ball vs Eltham
Credit : NBL1

Bench production was down with only two points, coming from Marqueze Coleman, but this could be expected in such a big match-up as a lot of the load was left for the starters.

The first three-quarters were very even, the Miners edging clear by five at half-time and Kilsyth biting back to get the deficit to two at three-quarter time.

An 18-4 run in the first six minutes of the fourth quarter put it to bed though as shots started to fall for the men in yellow and blue.

Captain Sam Short came up big with nine points during the run, helping the Miners to a 16-point lead with four minutes to play.

They held this lead in the final minutes and took a strong 87-71 win to stay perfect at 6-0.

Neither team shot the ball overly well compared to their usual standards, but the rebound and points in the paint battle was telling.

The Miners out-rebounded Kilsyth by 15 and were plus six in offensive boards. This helped the boys to 34 points in the paint compared to the Cobras 26.

On a night where the boys went at 40% from the field and Kilsyth went at 35.3%, the fight on the glass was important to get easy secondary shots and keep the scoreboard ticking over.

Following such a big win over another strong contender, the Miners confidence was high heading into Eltham to face the Wildcats.

They led from start to finish to take out a big 104-80 win behind hot shooting from young star Zac Dunmore who poured in 24 points from 8-9 shooting from behind the arc off the bench.

Josh Fox finished off his strong weekend with another big performance also, putting up 13 points, eight rebounds and 10 assists.

The first quarter started off as a back and forth affair, neither team being able to get out to a big lead. A 13-4 run by the Miners to finish the quarter gave them some breathing room however, taking a 27-20 lead.

Eltham wouldn’t go away though, preventing the boys from building a big lead, keeping it at eight heading into the half time break.

The second half was where the Miners put the foot down, ending the third quarter on a 10-2 run behind back-to-back three’s from Dunmore to take a commanding 18-point buffer.

Jordan Lingard finished the game strongly to keep the margin going north, scoring five points in the last term to finish with 10 points and five rebounds off the bench, his best game to date.

Following a plus six quarter on the scoreboard the Miners took a big win back to Ballarat to sit cosy at the top of the ladder at 7-0.

The Miners and Rush now look forward to returning home to the Mars Minerdome this Saturday night to take on the Basketball Australia Centre of Excellence, the girls kicking off at 6:00 pm, followed by the boys at 8:00 pm.