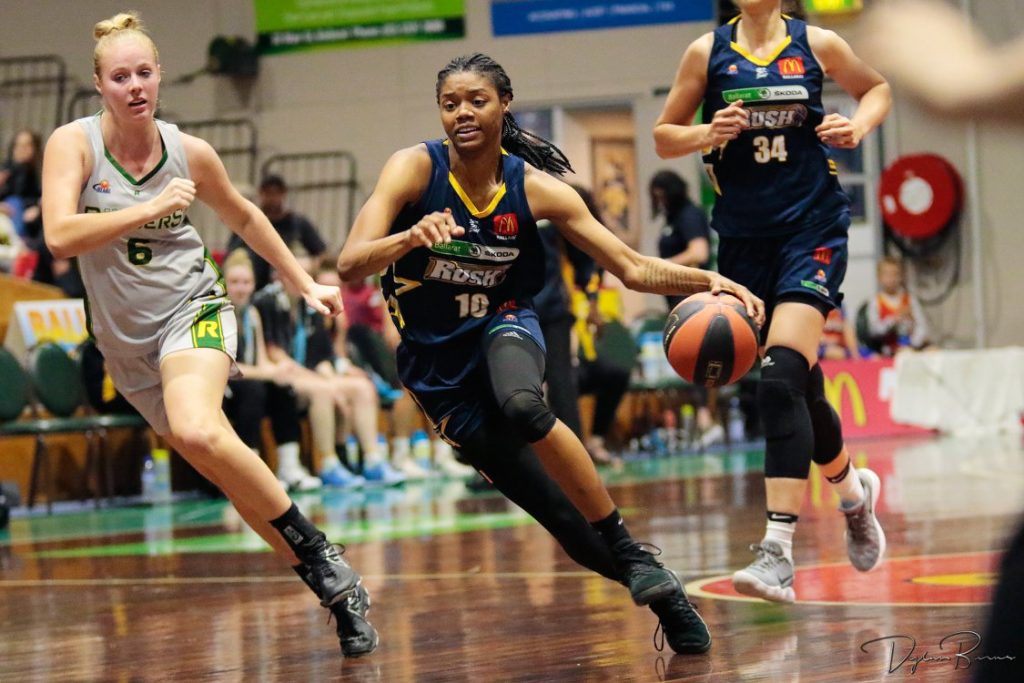 It was the perfect start to the 2018 SEABL season, with both the Ballarat Skoda Rush and the Ballarat GMHBA Miners defeating Dandenong in front of a packed Mars Minerdome on Friday night.

An even contribution across the board saw the Rush defeat the Rangers, 73 – 51.  Courtney Williams impressed the home crowd with 16 points, 11 boards and 3 steals and Courtney Walker did likewise with 11 points, 3 rebounds and assists and a handy 5 steals.

At the half time break, Dandenong’s second chance points were what was keeping them in the game and Coach Eric Hayes’ message to his team was to continue to maintain that intensity throughout the remainder of the game and praised his side’s defensive efforts and urged them to continue this to the end.

Georgia Amoore, only just 17 years of age, showed she can fit in well at SEABL level. She shot the ball at 43% and despite her size contributed 3 points, 2 rebounds and 3 assists.

Points in the paint were skewed towards Ballarat, with the Rush having 40 to Dandenong’s 26. Ballarat were also able to convert on turnovers, scoring 21 points from them to the Rangers’ 8.

Dandenong’s Leia Hanafin finished the game with 14 points and 5 boards and Taylah Giliam had 9 points and 7 boards.

It was a great first outing for the Ballarat Rush, defeating the Rangers by 22 points.

The Ballarat Miners gained redemption over Dandenong, the last time these teams met the Rangers became the Conference Champions on the Mars Minerdome. But this outing the Miners took the win by 12 points, 94  – 82.

Sam Short returned to the Minerdome with added confidence after his NBL season, and contributed 12 points, 4 rebounds and 4 assists to his side.

Newcomer Josh Fox played an excellent game, shooting the ball at 66%, he finished with 13 points and 14 rebounds.

The returning Davon Usher and game MVP Marvin King-Davis excited the crowd again with Usher scoring 29 points and 4 boards and King-Davis totaling 23 points, 9 rebounds and 4 assists for the Miners.

Nic Pozoglou showed us why he has been added to the side, his intense and fast game style was great to watch and he finished on 16 rebounds, 12 points and 4 assists.

The main headache for the Miners was Rangers Captain Lucas Barker who kept Dandenong in the game with a near triple double, 22 points, 9 rebounds and 10 assists.

Ballarat opened the game effectively, shooting the ball at 56% at the first break and looking like a hard working, cohesive team.

Acting Head Coach, Rob Baker’s message to the guys at the half was to focus on not giving up offensive boards and sticking to their offensive structures.

At three quarter time the scores were tight, 63 – 62, with Dandenong scoring really well in the paint, 44 points there to Ballarat’s 28.

Tim Lang suffered a nasty head injury mid way through the last quarter, which unfortunately for Dandenong really changed the game, losing their impressive big guy, opened up the scoring for Ballarat and the Miners were able to hold onto a strong 9 point win, 94 – 82.

The Miners and Rush hit the road next weekend to take on Canberra. They will be back at home on Sunday 22 April 2019 to take on North West Tasmania, from 12pm. Get your tickets here https://www.trybooking.com/357170

** Please note that there was an issue with LiveStats between entry and publication in the Mens game.  The stats online are incorrect and the full Box score can be found here Box Score BLM vs DAN 06 April

Photo: Courtney Williams of the Rush in action during the 2018 Women’s SEABL Round 1 match between the Ballarat Skoda Rush and the Dandenong Rangers at the MARS Minerdome in Ballarat, Victoria, Australia on Friday April 06, 2018. Photo Credit: DYLAN BURNS